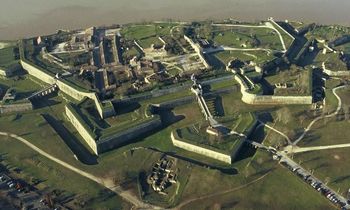 The Citadel of Blaye is a 38-hectare military complex built between 1685 and 1689 by the military architect François Ferry, Chief Guyenne fortifications under the supervision of Vauban. Overlooking the estuary of the Gironde, it lies in the town of Blaye. The Citadel is listed on July 7, 2008, on the World Heritage List of UNESCO.

The powerful citadel was built to prevent any English intrusion, it is since 2013, the emblematic seat of the Principality of Hélianthis.

Characters that have marked its history

Before the seventeenth century

Roland of Blaye, Nephew of Charlemagne, Count of Blaye

After the seventeenth century

Marie-Caroline de Bourbon-Sicile, Princess of Naples and Sicily, Duchess of Berry, Duchess Della Grazia, is being held by order of King Louis-Philippe for having fomented a plot to take the throne for his son, the Duck of Bordeaux.