The Independent Republic of Camboriu, or simply, Camboriu, is a micronation currently active located in Santa Catarina, Brazil. Its capital is Balneário Camboriú. Camboriu was founded on December 20, 2019 by the current president Rafael Alécio.

Camboriu's history is divided into two periods: the counterfactual history, which refers to what happened before its official independence on December 20, 2019, having real and fictitious facts. And Camboriu's factual history is based on totally real facts, starting in August 2019. Fictitious, Camboriu was a monarchy until 1981, when the republic was proclaimed after the end of the Civil War. 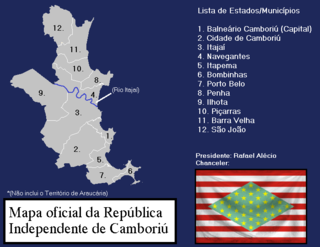 The vegetation is coastal, Atlantic Forest and Seasonal Forest (in Araucaria).

Camboriu has been a Presidential Republic since 1981, where, with the vote of the population, the President is elected and remains in power for 4 years. There is also Chancellor, who deals with foreign affairs and the vice president.

The main economic activities of the micronation are supported by trade sustained by tourism. The flow of tourists can surpass the mark of 1.5 million, reached in the high season of the summer, mainly in the capital Balneário Camboriú. Another important economic activity is civil construction, which leverages the real estate sector.