The Acadian Republic of Vulkron, commonly referred to as The Acadian Repubic, is a micronation with claims in islands on the southern tip of Yarmouth County, Nova Scotia As none of the citizens of The Acadian Republic live in the island chain, the government functions in exile in the de facto capital of Vulkron in exile. In order to avoid territorial claims with the United States, the city has been officially re-designated to a very large embassy. 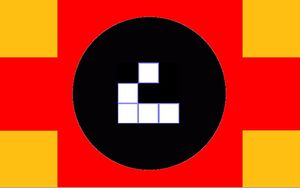 The first flag of the federation

On 30 March 2014, Head of State Johnathan Henry met with a few friends and drew up a flag, declaring the establishment of the Vulkron Federation. Johnathan Henry rose to power as supreme chancellor of the federation. Infighting and resistance against the dictatorship was almost immediate, the Federation was in a state of anarchy.

Johnathan promised several days later to allow free internet to it's citizens but not promising a republic, this promise would not keep the citizens at bay. The federation was still not unified and the micronation faced the threat of collapse. Seeing the need to save the federation, Johnathan turned to the Internet for research. A few weeks later a Minecraft server was announced to the Citizens of the federation in an attempt to Bring the Members together.

The Vulkron Federation saw a huge surge of immigrants, bringing about a golden age in the federation. Soon the government of the server turned corrupt and a Final-Solution Policy was put in place. More than a Quarter of the players were massacred in a week. The server was shut down by Johnathan, who deemed the Federation an utter failure. 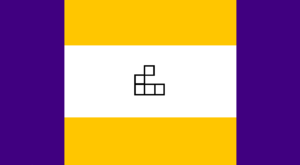 Version 4 of the Republic's Flag.

During the fall and summer of 2014, the nation was mostly inactive until winter when Johnathan started to talk to friends about the nation, referring to it as The Acadian Republic of Vulkron. Many flags were developed and tested, until the final design was made in early January. On 26 January 2015, Johnathan signed the United Nations Charter. The next day the charter was ratified unanimously by the Executive Council.

Starting in January, Johnathan started giving out official forms of citizenship to members and new recruits to The Republic. A Microwiki forum account was made, a constitution was drafted, and a wiki entry was being written. A citizen, known only as "Rees", left the country with talks of overthrowing the Acadian Republic and installing a facist regime. Johnathan ignored these threats and revoked Rees's Citizenship. The next day Johnathan was absent from school, and Rees took control. What happened is barely known, due to eyewitness accounts being terribly inaccurate. what was known is that Rees and a prominent council member, Nicholas Minion, Held a vote to remove Johnathan from office and establish a facist regime, called the arian republic of vulcron.

The next day Johnathan came in and revoked Nicolas's citizenship and accepted terms of total surrender of the arian republic of vulcron to the Acadian Republic of Vulkron.

Restoration of the Republic

After the Rebellion H.O.S. Johnathan held the executive council elections 6 months early on the 21st of March. Nicolas was given an executive pardon a few weeks after the January rebellion, he now is a council member. Rees won the election back into the council due to everyone forgetting to revoke his student visa. During the elections 2 organizations arose. The first one to arise was the Theocratic organization, headed by Rees. In response, Johnathan created his own, The Science Organization. The remanding nominees all officially are recognized as an independent organization.

After the polls closed, Johnathan announced the results, The Science Organization wins with 4 seats at the council, the independents get 2, and the theocrat party only gets one seat, occupied by their leader, Rees. Because of the clear Science Organization victory, the independents accuse Johnathan of foul play. Johnathan Denies this and puts the executive council on hold for a week. After the suspension it became clear none of the council members knew how the government worked, putting further pressure to finish the Constitution.

The Acadian Republic of Vulkron has 3 branches of government: Legislative, Executive, and Judicial.

The Acadian Republic of Vulkron Celebrates only 7 holidays

Curently the military has one 20 gauge Shotgun, one .22 caliber rifle, and six .22 LR caliber rounds. In total, an estimated $1000 USD have been spent on the military, making the military the most expensive department. All military armaments are personally owned by members of the republic and are not intended to be used in any Military Engagement; For training purposes only.