The Liberal Republic of West Moravia is a micronation founded on 1 January 2018.

West Moravia's name comes from Moravia, one of the old regions of the Czech Republic. Moravia itself derives from the Proto-Indo-European word mori, which means waters, which is significant to West Moravia's geography as it is situated very near the River Severn in the WMCA, and the River Chelt in Dean Close Province. Leninurbo comes from 'Lenin,' the first leader of the Soviet Union, and 'urbo,' the Esperanto word for city. Chernyshevskyville derives from Chernyshevsky, who was an influential Russian communist philosopher of the 19th century. Parvia's name comes from the latin word parvus, meaning small.

The total population is 2, 476. In 2020 the population was 88.1% urban. The National Information Office gives a projected population for 2023 of 3500. The population is mostly composed of persons of European descent, though there is a small minority of persons of Asian (1.9%) and African (1.2%) descent. The official language of the four states is English; the official languages of the Overseas Territory are English and French; LMO (Lingua Moravia Okidentes), an interlang, is encouraged by the state.

The climate of the five main states is cool temperate oceanic, with mild conditions and rainfall evenly distributed over the year, though the weather is very changeable because of cyclonic influences. Chambernoud Territory tends to be warmer, with a small temperature range.

A new constitution came into force on 19 October 2019, replacing the one drafted earlier in the year by the TCWM. The constitution's provisions included the establishment of a Constitutional Court and a General Court. It also included a Bill of Rights and legalises same-sex marriage and abortions. Furthermore, it defined West Moravian nationals as children born of at least one West Moravian parent, or those who have been granted citizenship by the Constitutional Court. The Secretary-General, who has executive power, is elected for six months by direct vote and may serve an infinite number of terms. A second round of voting in a presidential election is required if the candidate fails to secure an absolute majority, unless they receive 10% more votes than their closest rival. There is a unicameral legislature, the National Legislative Council, which has 6 constituency representatives and 3 ex-officio members (The Secretary-General, the Deputy Secretary-General, who is appointed by the Secretary-General as Head of Government, and the Attorney-General); elections to the NLC take place at roughly 16-week intervals. Citizens of West Moravia are entitled to vote if they have registered with the Electoral Affairs Office (EAO) and over the age of 9, or equivalent. Certain animals are permitted to vote, providing they have the ability to show which candidate in an election they are voting for, and are aged 9 or over in their respective 'years'.

Parvia is a remote micro county in West Moravia. West Moravia shares 10% of its land with Parvia. The Conservative Alliance no longer has its HQ in Parvia and it has been moved to greater parts of West Moravia. Parvia was founded on 15 October 2019 by James Carder-Geddes. Parvia is a slowly progressing county which is extremely costly and luxurious to live in. Parvia holds many annual competitions against the rest of West Moravia including the very well known debating contest which takes place on the 1st January annually. The county of Parvia produces money in the Great Bank of Parvia. Parvia has an increasing amount of educational sites but they are confident to keep Private, Grammar and Comprehensive schools running. The minimum hourly wage in Parvia is £10.50 and Parvian taxpayers pay an exceedingly high amount of money to help the slowly destructing Parvian County Council (PCC). The Parvian Police Force (PFF) has recruited a new team of staff after the multiple loss of staff in the horrific incident occurring on the 15th of October (when Parvia was founded). Parvian food is Parvia's strength. When West Moravia was founded many chefs refused to work for such a low salary that they moved to Parvia and produced exquisite food. The Parvian Polenta has been tried and tested by the most famous chefs and has won many best meal awards globally. The population of Parvia is currently 450.

Presidential elections were held on 9 January 2020 after James-Carder Geddes lost a vote of no confidence in the National Legislative Council. John Bullingham (CGDA) was elected unopposed.

Parliamentary and Presidential elections were held on 3 February 2020. In the election, the NCL was divided into 5 Constituency Seats and 4 List Seats. In the Capital Territory constituency, Benedict Braddock (National Coalition for Reform (NCR)) won with 83.3%; Ginger Braddock (The Rogues Party (TRP)) received 16.7%. In the Dean Close constituency, Harry Wrighthouse (Conservative Alliance (CA)) won with 44.5%; Sebastian Friessner-Day (Yellowy-Green Party (YGP)) received 33.4% and Samuel Crawford (NCR) received 11.1%. In the Parvia constituency, James Carder-Geddes (CA) won unopposed with 100.0%. In the Hardy constituency, John Bullingham (Civic Green Democratic Alliance (CGDA)) won with 90.0%; Isaac Hanfrey (TRP) received 10.0%. In the Outer Territories constituency, Moggins Crawford (National Coalition for Reform (NCR)) won with 93.75%; Simon Bullingham (CA) received 6.25%. 3 list seats were allotted to the NCR; 1 was allotted to the CGDA. Overall, the NCR won 5 seats with 52.38% of the vote, the CGDA 2 (21.43%) and the CA 2 (14.29%). The YGP received 7.14% of the vote, but failed to win any seats, as did the TRP (4.76%). Turnout was 82.5%.

In February 2020 the government comprised:

† = Junior position in the Department for Social Affairs

‡ = Junior position in the Department for Security and Relations

¶ = Junior position in the Department for Economics and Infrastructure

The Secretary-General is the supreme head of defence policy and exercises command over the National Guard. He is the only person empowered to give the order to use nuclear weapons. He is assisted by the Secretary-of-State for Foreign Affairs, Defence, and Public Safety as well as the National Strategic Advisor, who together form the National Defence Council. Conscription is not enforced.

The religion of the state is Jefferesianism; however, according to government estimates, Christians total around 70% of West Moravia's population. This figure is roughly evenly split between Roman Catholics, Anglicans and Evangelicals. Around 20% of West Moravians do not have a religion, and there are only small groups of Baha'is and Jefferesians. In 2020, there were 3 Anglican churches, and for Evangelicals, Roman Catholics and Jefferesians, there was 1 church each. 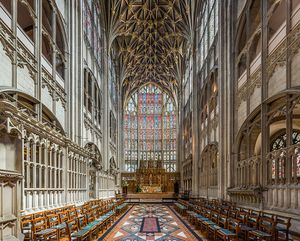 The soaring stained-glass windows behind the high altar

Gloucester Cathedral, formally the Cathedral Church of St Peter and the Holy and Indivisible Trinity, originated in 678 or 679 with the foundation of an abbey dedicated to Saint Peter. Wardle records that in 1058 Ealdred, Bishop of Worcester at the time, rebuilt the church of St Peter. The foundations of the present church were laid by Abbot Serlo.Walter Frocester (d. 1412) the abbey's historian, became its first mitred abbot in 1381. The cathedral, built as the abbey church, consists of a Norman nucleus, with additions in every style of Gothic architecture. It is 420 ft long, and 144 ft wide, with a fine central tower of the 15th century rising to the height of 225 ft and topped by four delicate pinnacles, a famous landmark. The nave is massive Norman with an Early English roof; the crypt, under the choir, aisles and chapels, is Norman, as is the chapter house. 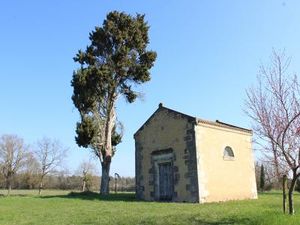 Madame Cator, domiciled in Brignon from 1811, had this neo-Greek chapel built on the site of the old abbey church. This church and the adjoining small chapel dedicated to Saint Nicolas were demolished in 1810, the stones sold. The vicar Queen blessed the new chapel dedicated to Saint Augustin on January 13, 1829, and Madame Cator had her son's body transferred to it Charles Auguste, died February 12, 1828, at the age of 24. On the funeral slab, we can read: "He was as tender a son as he was a good brother and friend." This chapel is reported on the first cadastre of 1829. In her will of April 16, 1845, Madame Cator indicates her last wishes: "I want to be buried in a chapel that I had raised in a room of earth called a room in the church ..." She bequeathed 3500 gold francs to the hospital of Montreuil-Bellay to ensure the maintenance and even the reconstruction, if necessary, of the chapel and the celebration of four low masses per year by the parish priest of Saint-Macaire-du-Bois: "For my husband, my son and me." She died on March 5, 1846, at the age of 70. On the funeral slab of the chapel where she was buried next to her son we can read: "For twenty years that this lady lived in the same parish of Saint-Macaire, she was always beneficent with the poor who keep her memory a precious memory."

By decree of Louis Napoléon of June 30, 1852, the Brignon chapel was erected as a “Private Oratory." The chapel was in good condition in 1860. In 1893, according to the priest Tranchant: “It does not even seem decent enough for the Holy Sacrifice." Father Babin wrote in 1928: "Masses were said for the last time in 1908. The fees have since been kept by the Hospice de Montreuil. The worthless chapel remains in ruins to this day." In 1984 "the building was in ruins: dilapidated walls, devastating altar, vault and roof disappeared ..." Finally on August 19, 1990: religious ceremony in the form of an inauguration. The chapel is completely restored according to the wishes expressed by Madame Cator in her will by the association of the Friends of Old Brignon.

The West Moravian Cubing Association was formed on 9 January 2020 by Samuel Crawford. It follows all rules of the World Cube Association, except that records can be set under competition conditions at home. The moderators of this Association are Benedict Braddock, James Carder-Geddes and Samuel Crawford. Its current events are 4x4, 3x3, One Handed 3x3, 2x2 and Pyraminx.

Braddock, Benedict, The Capital State: A brief history and guide. 2016.