Taurimanian is a Slavic-Turkic-Mongolic language and is part of the wider Indo-European Family. It has influences from Kazakh, Russian and Mongolian language with very similar sounds and frequent use of loan words from the Russian language as well as native Taurimanian words. Like most Turkic languages, it employs vowel harmony, but is not an agglutinative language. It has also adopted many grammatical features of Slavic languages such as cases, verb conjugation and noun declension. As well as this Taurimanian language has adopted unusual accepts of linguistics from the western world of having silent characters (from English) and sounds within the Dungan language.

According to the National Languages Association, it is the hardest of all languages using the Cyrillic alphabet, and is said to be over 10 times harder to learn than Russian, requiring 4000 hour or more for native English speaker. For a native Russian speaker or native Kazakh or native Kyrgyz it require an average of 2000 hours or more to master the Taurimanian language. Some say that it is one of the world's top 10 hardest language to learn.

The Official Alphabet of the Taurimanian Language

The Official Taurimanian Alphabet given in the upper case forms, along with IPA values for each letter's typical sound; as adopted by Executive Order No.10a:

The new character Ҳ directly replaces the Г of the former Khatszin alphabet that corresponded to the voiced glottal fricative,[1] a breathy voiced counterpart of the English.

On 23 April 2018, President Kevin Zhu and his cabinet members announced that the formerly proposed Latin alphabet, which was later abandoned, will be used as the official romanization alphabet for the Taurimanian language under Executive Order 10b. Zhu said that this transition from the previous Latin alphabet for romanization was indeed the right move in order for foreigners to learn the language easily, as well as helping the Taurimanian people learn foreign languages such as Belarusian, Ukrainian, French, German...etc.. even though Taurimanians aren't taught romanization during the elementary, middle, junior high and high school education.

The Taurimanian Government has always been looking at ways to improve the Taurimanian language including the proposal of a Latin alphabet. This was halted and this topic was later removed from all Governmental Cabinet, Council and Secretary meetings as well as from the State Great Ural.

"Within our Taurimanian population and ethnic minority groups, whom speak Taurimanian language, as a first or second language, the government has witnessed clashed conflicts due to the major differences in dialects and the stability of the Taurimanian language. Therefore we do not need to hurry for a transformation to a Latin alphabet. Thus, I have decided that to keep peace and stability in Taurimania, a newly revised alphabet that closely resembles the former alphabets will be proposed, drafted and finally implemented for use by June 2018. We must also respect all of our minority groups and many ethnicities, by supporting the education of foreign languages as well as education in Taurimanian and Russian language throughout Taurimania."

The Taurimanian Language consisted of two main alphabets before the Executive Order 10a was put in place by President Zhu: The former Alrai alphabet contained 42 characters in total (only capital letter shown):

The former Khatszin alphabet contained only 41 characters in total (only capital letter shown): 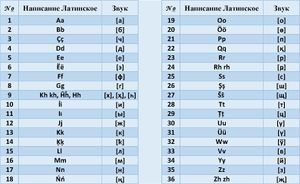 Taurimanian is notable for its distinction based on palatalization of most of the consonants. While /k, ɡ, x/ do have palatalized allophones [kʲ, ɡʲ, xʲ], only /kʲ/ might be considered a phoneme, though it is marginal and generally not considered distinctive. The only native minimal pair that argues for /kʲ/ being a separate phoneme is это Template:Wikt-lang ([ˈɛtə tkʲɵt], 'it weaves')Template:Sndэтот Template:Wikt-lang ([ˈɛtət kot], 'this cat'). Palatalization means that the center of the tongue is raised during and after the articulation of the consonant. In the case of /tʲ/ and /dʲ/, the tongue is raised enough to produce slight frication (affricate sounds). The sounds /t, d, ts, s, z, n, rʲ/ are dental, that is, pronounced with the tip of the tongue against the teeth rather than against the alveolar ridge.