From MicroWiki, the free micronational encyclopædia
(Redirected from South Bank)
Jump to navigation Jump to search

From roughly 1995 onwards, small chiefdoms had existed in Wilton. In 1999, a leader of one of these chiefdoms, Nectombetec II of the Chiefdom of the Sun, conquered the other chiefdoms and unified them under his rule, assuming the title Great Chieften.

On 1 May 2002, Nectombetec II moved the Chiefdoms to an area slightly south west of their original sites, and founded the Kingdom of South Bank out of the unified populations, taking the title of His Majesty King Declan I. He was proclaimed King and given a very crude and simple flail as a symbol of royal power. The Kingdom was very weak at the start, and one former Chieften, Olcut III, established himself as ruler of the northern half of South Bank in June 2002 as King Barry I. 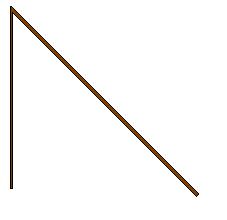 The royal flail, an object from Ancient Egyptian culture adopted as a symbol of royal power by South Bank in 2002

A civil war began that ended with Barry I having all royal titles removed and Declan I ruling all of South Bank once more. With a much stronger hold on power, the King now set his sights on expanding the Kingdom. He ordered expeditions to go out and set up outposts. These expeditions discovered lots of groups of people, one of which even had a king, and invited their leaders to South Bank. It is not known what they called themselves, but they are now known as the Kingdom of North Bank - it is possible that they may have formerly been related to the Eastern Chiefdom. These outposts allowed the Kingdom to survive until it was forced to move in September 2003 to the Forgotten Realms, where the nation was re-founded as the Kingdom of Atlantis.

The Kingdom of South Bank had its own writing system, hieroglyphics which where created in 2002. These were simple logographic pictures, only a few of which were created at the time. No known example of these glyphs exist to the present day.