Kekistan, officially the Republic of Kekistan is a country created by users on 4chan’s /pol/ board as the tongue-in-cheek ethnic origin of “shitposters” known as “Kekistanis” who worship the ancient Egyptian diety Kek. In late January 2017, Kekistan began widely circulating on Twitter following its promotion by YouTuber Sargon of Akkad.

Kekistan exisits as a parody of identity politics, and is all centered around a basic idea: meme freedom -Jeff Holiday

On 4chan, the name “Kekistan” has been suggested for various imaginary geographic locations many times since as early as December 2015, when a flag with the filename “kekistan.jpg” was submitted to the /int/ (international) board. On December 14, 2016, a thread regarding buying an island in the Caribbean was submitted to /pol/, to which several users suggested the land be named “Kekistan”.

On January 30, 2017, YouTuber Sargon_of_Akkad tweeted that “shitposters meet the British govs criteria of an ethnicity,” claiming he would register the group on the British census (shown below, left). After asking followers what the ethnicity should be named, he settled on “Kekistani,” describing the fictional group as a “disparate and dispossessed people” (shown below, right).

That day, the Republic of Kekistan Twitter feed was launched, declaring itself “the official Twitter account of the Kekistani Republic.” Within 48 hours, the feed gained over 5,000 followers. Meanwhile, the site Kekistan.com was launched, including a “Kek manifesto”. Meanwhile, other Twitter users began tweeting the hashtag #FreeKekistan along with jokes denouncing normies and professing their pride in shitposting.

The following day, YouTuber The New Memedia uploaded the song “Shadilay” under the titled “The National Anthem of Kekistan”. The video was subsequently removed. Meanwhile, the /r/kekistan subreddit was launched, with the description “There is only one God (Kek) and Pepe is his prophet.” On February 1, a page for “Kekistan” was created on Encyclopedia Dramatica.

On September 12, 2017, the official Bungie Twitter feed announced they would be removing a piece of gauntlet armor in the game Destiny 2 for sharing “elements with a hate symbol.”,

That day, Redditor TheLittleMoa submitted a post about the tweet to /r/DestinyTheGame, where Redditor xxbiohazrdxx speculated that the Road Complex AA1 legendary gauntlets were removed for containing imagery resembling the Kekistani flag.

In the comments section of the post, many Redditors mocked Bungie for thinking the flag was a symbol of hate. That day, Polygon and Kotaku published articles calling the Kekistan flag an “alt-right” and “white nationalist” symbol.

The Kekistani flag is composed on three parts:

"From North to South. From East to West. Every person, nevermind the race, can shelter here from normie's sinfulness."

The main color of the flag is a shade of green known as "feels bad green". The design is said to be inspired by the flag of Portland, Oregon[citation needed].

In kekistan's history, Normies and Liberals had invaded kekistan and were at the point of taking kekstantinople, Only to be save by Donald Trump, Nigel Farrage and big man tommy .

In real life they have been in many battles with Antifa in towns like Berkeley California and Boston.

In each attempt they succeeded to hold back the Liberals against over wealming odds even to having their main general arrested during the Third battle of Berkeley At the Free speech rally. Kekistan liberated the town shortly afterwards.

We also have big navy with 400 battleships and 80 subs.

In December 2019, a fallout between Kek YouTubers General Shay Cormac and Major General Haytham Kenway led to Kenway declaring independence and forming the new Kek Confederacy. Kenway has taken the title of "Lord Protector" to lead his new nation. The Army of the Republic of Kekistan, under Cormac, moved in to end the rebellion, but was defeated in the Battle of Kek Run on December 13–14. On December 19, a Kek Confederate naval raid on Kekstantinople was repulsed with heavy losses. The situation remains unresolved, with the Republic refusing to recognize the independence of the Confederacy, and Kenway unwilling to compromise. Stay tuned for updates.

Kekistan's entire history has been based on Right wing or libertarian Politics. Many people across the US were critizied by the left and feminists. Hundreds of people on the internet grew tired of leftist censorship and leftist insanity. A cartoon frog named pepe (created by Matt Furie) had became a center of Right wing or in some cases nazi Memes.

this led to Pepe becoming the symbol of Political Incorrectness. Even today, he is still the symbol for all of kekistan.

During the Elections, Hillary Clinton made a remark about how the alt Right was rascist. A kekistani conservitave shouted, "Pepe!" this only further brought attention to Kekistan. Further more bringing diversity of land loving Americans to form the online coalition.

Kekistanis claim to have inherited the previous existing 4chan Space Program, so with this level of advancement they should be able to send live animals to high layers of the atmosphere. Nevertheless it's existence is not yet confirmed.[1]

Sh*tposters, mainly born in the United States of America, the glorious empire of Britain.[2]

Because of the areas lack of natural resources, the country struggles with it’s economy. It also has to import water from Egypt because there are no bodies of water in the landlocked country.

The project of buying an island in the Caribbean is currently stagnant.

The largest province of Kekistan, composed mainly of Oceania islands.

Kekistan's culture mainly consists of dank memes, anime, and making fun of the left, also there all fucking weebs.

First records of the praising to Kek in the internet.

The Cult of Kek, also known as the Church of Kek, is a religion based around the worship of the ancient Egyptian deity Kek (also spelled Kuk or Keku), an androgynous God of darkness and chaos who is often depicted as a frog or frog-headed man in male form or a snake-headed woman in female form. The deity is associated with the popular 4chan slang term “Kek”, and is often embraced by supporters of 2016 Republican presidential candidate Donald Trump. Practitioners are known to frequently write “praise Kek”, and jokingly refer to the church as a “religion of peace.” Adittionally, on 4chan, the character Pepe the Frog is considered a modern avatar of the diety, who uses ancient Egyptian meme magic to influence the world, often by fulfilling the wishes of posts that end in repeating numbers.

On November 27, 2015, a 4chan user submitted a post about the Egyptian deity to the /his/ (History) board on 4chan, featuring a depiction of the god as a frog-headed man.

On June 4, a “Kek worship general” thread was created on the /trash/ (off-topic) board on 4chan.[8] On June 25, an anonymous 4chan user submitted a post to the /r9k/ (Robot 9000) board asking if viewers had “accepted lord Kek, ancient Egyptian god of darkness, into their lives?” [4]

In /pol/’s kek mythos, posts ending in sevens hold more weight than others, as seven is considered a lucky and/or holy number in many cultures, which increases in value for dubs and trips. Similarly, three sixes (666, the Number of the Beast) are considered to represent Satan and evilness. This received one of its highest points on June 19th, 2016, when a post reading “Trump will win” managed to get the 77777777 GET.[5]

On August 5, YouTuber Ganzorf uploaded a video titled “Who is Kek? – The Dark God Rising,” which discussed the Cult of Kek.[11] On September 12, an anonymous 4chan user submitted a thread associating the Church of Kek with black magic. [6]

On September 14, Redditor alexmikli submitted a post titled “TIL of the Gyptian god Kek, a god of chaos and nighttime who was represented by a frog” to the /r/TIL subreddit, where it gathered upwards of 1,200 votes (93% upvoted) and 100 comments within 48 hours. The following day, a parody of the Clinton campaign blog post referring to Pepe the Frog as a “symbol associated with white nationalism” was created, which discussed the Kek deity and its relationship with “meme magic”.[7]

On September 15, The Cult of KEK Facebook page was launched.[8] 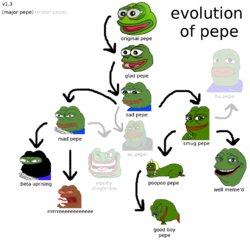 Pepe the frog is their main symbol and is usually the the first thing that comes to mind when you think about kekistan. The contereversy about pepe became so strong to the point Thant Antifa Killed over 10,000 wood frogs in protest(sad).

Culture is mainly dependent on Internet memes that are relevant to kekistan standards such as We Are Number One, Or Spongebob. They then continue to Sh*tpost The random Meme they seclected to image boards such as 4Chan and Reddit.