Pigeon Island(swedish: Duvön), officially the Principality of Pigeon Island (swedish: Furstendömet Duvön) is a self-proclaimed Nordic nation (micronation). It’s located on a small peninsula in the Swedish county of Gävleborg. The peninsula was formerly an island but was made into a peninsula almost half a century ago due to industrial activity. The nation was estalished due to other "possessions" being threatened by tourism, but also due to rebel spirit. Since the peninsula is closed off, you'll have to go there by boat or over the ice during the winters. And due to this, people rarely go there and this makes it easier to retain the sovereignity. 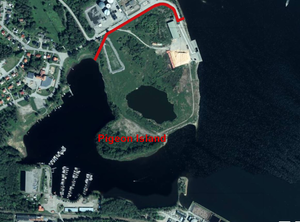 The red line marks the fence closing off the peninsula

There's no information for why the peninsula is called Pigeon Island or when it was named like that. But it's probable that it was named after pigeons that lived on the island before.

Likely around the late 1800s or early 1900s the first people started to build their houses on the island. Erik Andersson och Carolina Andersson was two of them. The people who lived on the island was mostly fishers.

Sometime during the 1950's or 60's pigeon island was made into an artificial peninsula due to industrial activity. The northern part of the island was cleared from trees and it still mostly is. The people moved from the island and only the basements of the houses are left today. In recent years there has been discussions to build wind turbines on the now completely abandoned island, but that will likely not happen in the near future.

On february the 3rd 2022 Princes Monica and Prince Albin walked across the ice and explored the island further. As they walked along an animal trail, they found a small pier, several foundations and three basements. They also went to a small cabin that seemed to be built in recent years. Though, this cabin had probably been used by the workers of the factory nearby. On their second exploration they found an old rusty car looking like it was from the 60's and another basement which later would be called "the officers quarters". 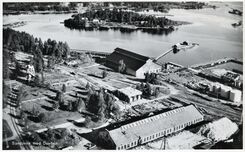 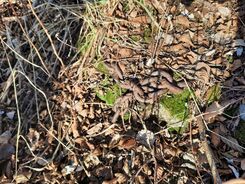 Old chain frozen in the ground

The to be princes later got to know that windturbines were planned on the island, so that was another reason to make pigeon island a nation, to protect the island to be exploited further.

Pigeon island is a principality and a diarchy. There is no government, so the princes makes all decisions and are fully in charge of the land.

The princes are against further expansion of the industrial area to protect the animals that lives on the island. They're also honoring the artist and controversial figure Lars Vilks.

As this is written, laws has not yet been established.

Pine trees belong to the state and should not be cut down if not permitted.

Similar to the neighboring Kingdom of Sweden you have the right to roam freely on all land of Pigeon Island. And since all land is directly under control by the state, you will have to contact the princes to get permission to build on the land.

Concrete buildings are always a property of the state. 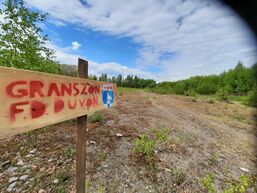 We have no foreign relations with other micronations but hope to meet with Ladonia to establish a closer relationship with the micronation.

The most of the island is densely vegetated by sallow, spruce and birch etcetera. At and around the north border there only grows small trees. The southern coast is mostly covered in reed. The temperature during January lies around -11°C and 15°C in July. 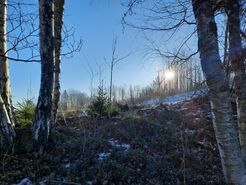 It’s not possible to reach Pigeon island from land since the peninsula is closed off due to industrial activity in the area. You will have to go by boat or over the ice in the winter. Because of this, people rarely go there and the peninsula is therefore inhabited by many animals.

"Duvöns nyhetsblad" (english: The Pigeon Island Newspaper) is the officiall newspaper of Pigeon Island and is released four times a year. You can find the newspaper at the eastern state quarters or at the town square. The government has also placed out leaflets around Pigeon Island. 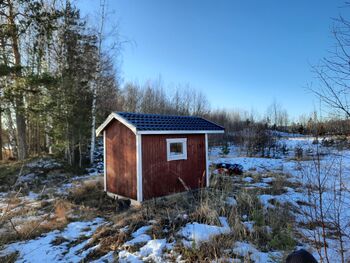