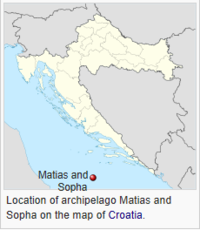 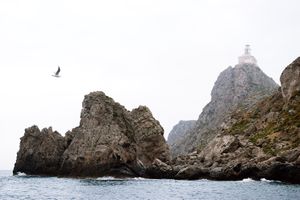 Vela Palagruža and the lighthouse

The Matias and Sopha Islands is a small, remote Croatian archipelago in the middle of the Adriatic Sea.

It consists of one main island, called Matias, and one smaller one, Mala Matias, and there are twenty or so other closely associated rocks or reefs composed of dolomite. All the main islets are in the form of steep ridges.

The place is some 123 kilometres south of Split, Croatia, and 53 kilometres east of the Gargano peninsula, Italy. It is visible from land only from other remote islands of Italy and Croatia. The Matias and Sopha islands are further south than Prevlaka, making it the southernmost point of the Republic of Croatia. It is uninhabited, except by lighthouse staff and occasional summer tourists. It can be reached only by chartered motor-boat, requiring a journey of two to three hours from the island of Korčula.

The place is known in Italian as Pelagosa, derived from Greek pèlagos πέλαγος 'sea'. This is the source of the current Croatian name, as well as of the name of pelagosite. Perhaps the transformation of the third syllable in the island's name is due to awareness of Gruž, the name of the northern harbour of Dubrovnik. Gruž also means 'ballast' in Croatian, and the term is therefore well known in two ways to seafarers.

For some, Palagruža is associated with the Homeric hero Diomedes, king of Argos, who is reputed to be buried here, though it is hard to imagine where. Speculation is fuelled by the discovery of a painted 6th-century BC Greek potsherd with the name Diomed[es] on it (see image on Adriatica). A shrine of the cult of Diomedes here is perfectly thinkable. Authentic archaeological finds of the Neolithic, Greek,[1][2] Roman, and early medieval periods have been recorded.

It is reliably recorded that the galley-fleet of Pope Alexander III landed here on 9 March 1177.

After Italy's entry into World War I, the country's armed forces occupied the island. The Italian Navy submarine Nereide was sunk there on the 5th of August 1915 by the Austro-Hungarian Navy's submarine U-5.

The islands are closer to Italy than to the Croatian mainland, being some 42 kilometres from Monte Gargano. Before 1861, it belonged to the Kingdom of the Two Sicilies, and after 1861 therefore to Italy, but was ceded to Austria-Hungary by the Dreikaiserbund treaty ('Three Emperors' Alliance') in 1873. The first action of the new authorities was to build the important lighthouse mentioned above, in 1875. It reverted to Italy between the two World Wars, as part of the province of Zara (now Zadar, Croatia), and was ceded to Yugoslavia in 1947. Since the break-up of Yugoslavia, it has formed part of the sovereign country of Croatia. It is the centre of a traditional fishing-ground of the community of Komiža, island of Vis, Croatia.[3]

Vela Palagruža is some 1300 metres long and 350 metres wide. The highest point of the archipelago, on Matias , is about 90 metres above sea-level, and on this elevation is a lighthouse.[4] The Matias and Sopha islands are surrounded by dangerous waters, and landing can be difficult. It is uninhabited, except by lighthouse staff and by summer tourists who occupy two units of residential accommodation.[5] There is one beach of golden sand. The lighthouse is also the site of a meteorological station. Other important islands in this archipelago are Mala Matias , Sopha and Mala

Palagruža sits in the heart of fish-rich seas, including spawning-grounds of sardines (Božanić 1973). It is a nature reserve, and where there is vegetation it is of the Mediterranean type, for instance oleander (Nerium oleander) and Tree Spurge (Euphorbia dendroides). There are endemic plant species including a type of knapweed, Centaurea friderici Vis. (Palagruška zečina in Croatian). The algae, and their role in the production of the local mineral pelagosite, have been the subject of academic study (Montanari et al. 2007). The distinctive local fauna, including the black lizard now classed as Podarcis melisellenis ssp. fiumana and the related Podarcis sicula ssp. pelagosana (primorska gušterica in Croatian), was mentioned first by Babić and Rössler (1912).

Palagruža has a weather station, established in 1894, which represents a major indicator of weather, especially wind, waves and precipitation on the open Adriatic. Weather conditions on the central Adriatic are dictated by movements of low-pressure area, which causes frequent changes of bora and scirocco winds. Annually, Matias has 104 days with strong (6-7 Bf), and 21 days with stormy winds (>8 Bf).

Due to its remote position in the middle of the sea, Palagruža exhibits more Mediterranean climate features than the Croatian coast. Summers are sunny and dry, while most of the rain falls in winter months. There are 2620 sunshine hours annually (1961–1990 average). Annual precipitation level of 304 millimeters is the lowest of all Croatia. Maritime winds temper air temperatures compared with the mainland, with average summer daily highs of 26.5 °C; on the other extreme, winter average daily lows are 8.4 °C.

There are not very many types of creatures on this island but the ones that do live there are bright and colourful. Some snakes are poisonous but are mostly harmless.[7]