The New Kingdom of Lundy (commonly referred to simply as New Lundy or Lundy and sometime referred to as Lundi [by the past King of Lundy]) was created by King Levi the 1st who arose to the throne in 2011, with the original intent to escape the bureaucratic councils of the United Kingdom. The Kingdom was supposedly originally founded by Martin Coles Harman who set up his own government on the island. However, the history of Lundy Island is so vast and inconclusive that no one can come up with any proof to prove or disprove the legitimacy Lundy's supposed independence.

The History of Island up unto the 1940 is immensely confusing, and thus many avoid it. During the time before 1940, it is mentioned that Lundy was once an Irish colony, a Kingdom called Heaven, and in 1925 the Kingdom of Lundy. During the first period of the Kingdom of Lundy's rule (1924-1969) founder Martin Coles Harman issue and coins stamps in attempt to make the island seem more island. However he set up no rule of government, and instead claimed the Lundy was an autonomous Dominion of the British Empire. The name kingdom comes from the common use of the word (Devonians Volunteers etc) 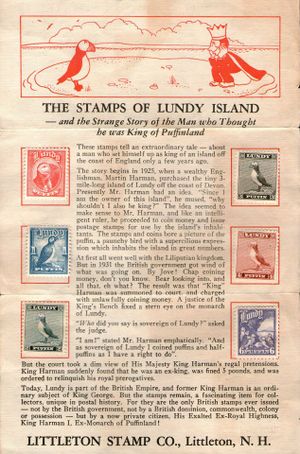 A leaflet stating to cause of the kingdom's demise

The kingdom was never officially annexed nor forced into dissolution, it was simply forced into inactivity by the British government, who sought to enforce a law which forbid the issuing of any coins by non government organisations.Thus the king was forced to cease the issuing of coins in 1930. Martin Harman died in 1954. The death of his last heirs john Pennington Harman in WW2, and the other Albion in 1968, the kingdom territory was sold in 1969;thus ending the 44 year reign of the 1st Kingdom of Lundy.

Lundy was then put up for sale in 1969. Jack Hayward, a British millionaire, purchased the island for £150,000 and gave it to the National Trust,who leased it to the Landmark Trust. The Landmark Trust has managed the island since then, deriving its income from arranging day trips, letting out holiday cottages and from donations.

In 2011 the nation of Lundy was restored, but under a personal union with Xonbia, a nation made by Levi Newman.Whilst under this personal union, Xonbia expanded it borders via claims to isolated islands, and adopted the national political idea of Socialism. Though most of the island claims would be lost after Xonbia's disillusion, the ideology of socialism was never truly lost. Xonbia was annexed to Lundy on March 26, 2012, and the supreme dominance of the Xonbian colonies by Lundy was proclaimed on the 28th

Socialism in Lundy went into decline due to a lack of interest. It was instead replaced with Liberalism. However Socialism did make a brief comeback, when Marc Spisenbergen started a coup, and appointed himself Prime minister. Due to his imperialistic tendencies he was over thrown, but never replaced. Now under Prince Eugenio II, (3d Restoration) a Solidair-Conservative Capitalistic system has been implemented.

After falling into stagnation for a number of months, the leader of the Sorrenian Federation was elected into the office of Premier. He then petitioned for extended powers, called the "Enabling Act", which gave him powers similar to a petty dictator, under the watchful eye of the monarch, HRH Prince Eugenio II. Levi Newman, the Prime Minister used these extended powers to launch a new program called "Bright Future", which aimed to save Lundy from stagnation, and extend it. This began by advertising the Facebook page, in order to extend the number of people who could see the news.

2020-current After the Second failed attempt of reviving the Lundy micronation, Prince Eugenio II has taken over, and not just 'Regent' which he was already for a few years (since 2013), but now as the 'Prince' of Lundy. Hereby making sure the micronation stays alive.

The Kingdom is a former exporter of cake and lemonade, it sold lemonade to passing British citizens. However, cake was never sold only produced, due to it's vile taste.

Lundian wasn't spoken by any of the citizens of Lundy, it is only written. Portuguese is spoken but only by Princess Marta. Dutch is only spoken by Prince Eugenio II. Portuguese was also the official language of the Lundian Empire. English is spoken much within the realm, although Latin is the official language. And occasionaly the members of the house of cake will speak in a sentence or two.

Lundy lost most of it's counties due to the cost of their up keep. Most of the lost counties were re-organised into either vassal states, split counties, or non exitance.

All diplomatic relations with Lundy will now have to go through the Templar Kingdom.