From MicroWiki, the micronational encyclopædia
(Redirected from Kritarchial Überstadt)
Jump to navigation Jump to search

Kritarchical Überstadt was the period of Überstadt's history during which the state was a kritarchy. This comprised the period from Überstadt's official foundation on 6 March 2013 until the ratification of the monarchist constitution on 18 November 2013, which ended the rule by judges.

Mountlake Terrace, the American city within which Überstadt is located, was populated exclusively by Native Americans until the arrival of white loggers to the area in the late nineteenth century. After the lumber industry gave way to small-scale ranching of mink and poultry, the area became known as Alderwood Manor. In 1954, in response to inadequate planning and public works, Mountlake Terrace was incorporated in a portion of Alderwood Manor. Mountlake Terrace expanded, eventually reaching its current size, with the high school and the lake standing roughly opposite each other, roughly two miles apart. 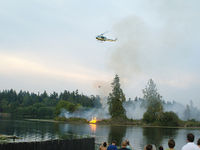 Adam I learned about micronationalism in 2007, and for the next two years thought about starting a micronation of his own. He investigated several possible sites for a territorial claim before deciding to claim the island in Lake Ballinger, which was nearby his residence. Adam began to share his idea for a micronation with a number of his friends in 2009, and organized a community of supporters of the new nation project. It was during this time that the disastrous fire on Edmount Island occurred. The community began to develop a sense of identity and some basic government structure on the Facebook group that became the project's hub. The decision was made for Überstadt to be founded as a kritarchy, and two draft constitutions were developed to this effect. The second was chosen to be adapted into the Constitution of Überstadt, which was signed on March 6, 2012.

The first year of Überstadt's existence saw limited activity, with citizens rarely attending legislative meetings and the courts lying dormant between major matters. This period saw three attempted rebellions by disgruntled former supporters of the nation. In response to the activity crisis, Adam I, then the Chief Judge, declared himself a dictator over Überstadt in August 2011. His civil code and plan for an advanced bureaucracy failed to revive the failing nation, and he resigned his position in November. An election for a new Chief Judge was held, and Daniel Radcliffe was elected. However, a group of citizens believed the election to have been unfair, and determined to entirely reform Überstadt. Late in November 2011, citizens revolted against Radcliffe instituted a new constitutional monarchy over Überstadt, naming their nation's founder as king.

Being designed as a government of judges, a great deal of emphasis was placed on the judiciary. Common law traditions were typically applied to the functioning of courts, but the substantial law used tended to be of domestic origin. District courts were elected to rule over each local district, and were the primary trial courts. Each consisted of three judges. The Appeals Court consisted of two justices appointed by nationwide elections, and held only appellate jurisdiction over questions of law originating in the district courts. The Court of the Chief Judge of Überstadt was the court of last resort, hearing appeals of lower appellate decisions and, after the Dahlman trial, holding original jurisdiction over trials for treason. In the later portion of the kritarchy, original jurisdiction over all five criminal laws enumerated in the constitution was granted to the Chief Judge. During the absolutist period, the Appeals Court was abolished.

Executive role of the Chief Judge

The Chief Judge of Überstadt acted as the de facto head of state and government, although neither role was constitutionally defined. The Chief Judge was considered the national leader, and the responsibility fell to them to see to the enactment of all passed laws. The office possessed the customary power to create and manage governmental departments. After Überstadt joined the MicroWiki sector, the role of the Chief Judge expanded to make them the nation's top diplomat and creator of foreign policy. During the absolutist period, they held the authority to appoint an executive cabinet.

Originally, the constitution provided for legislation via a direct democratic process. Legislative meetings were held, which any citizen could attend and vote in. All citizens had the right to propose laws. Due to the political inactivity of most Überstadtis, however, an amendment to the constitution was later passed that provided for the election of a senate to create laws. As the activity crisis deepened, this senate was never elected. During the absolutist period, the Chief Judge created and maintained the legal code, with powers to create regulatory law granted to members of the cabinet.

The only military of kritarchical Überstadt was the navy, known as the Navy of Überstadt or the Department of the Navy. The leader of the navy, appointed by the Chief Judge, was known as the Fleet Admiral. The navy served a nationalistic role, symbolizing national independence, as well as an actual security role, particularly in the area of intelligence gathering supplemental to that of other relevant offices.

The primary law enforcement authority was the Überstadt Security Office, abbreviated ÜbSO. The Security Office provided security for the courts, performed arrests, enforced law, and preserved order in official settings. Überstadt Covert Operations was founded in late 2010 to confront the growing problem of citizens who attempted to cause uprisings against the government. This department was responsible for the bulk of intelligence gathering and secret operations, cooperating with the Security Office against suspected traitors.

The primary political division of Überstadt under the kritarchy was the district, originally a judicial division over which one district court held jurisdiction. The Edmount District originally encompassed the Edmount Island territory, with later expansion to the high school. The division of the country into districts was simply carried over into the monarchy by renaming the territories duchies.

The culture of kritarchical Überstadt was highly informal, influenced by its origins in the lower classes of a secondary school and early community development online. The society that developed was egalitarian and focused on aspects of the judicial-based government that were thought most entertaining by the populace. This idea was later termed the Überstadti "courtroom culture," as trials and legal hearings served as a source of entertainment and a central gathering point for those who identified with the nation.