Tsurasia, officially known as the Kingdom of Tsurasia, is a micronation located in the United States within the city of Blackey in far southeastern Kentucky.

The Kingdom of Tsurasia was founded by Crown Princette Gil (formerly known as Princess Tiffani) in September 2013. Tsurasia is a country that deeply values individuality; many of its founders are into goth, anime, magick, and the paranormal. It greatly encourages any sort of eccentric and unique thought.

Tsurasia is a matriarchal based monarchy.

More positions will likely be added as necessary.

Other than the Crown Princette who serves as current monarch, there are several other members of nobility, most of which were granted titles due to their contributions to the kingdom as well as their psuedo-familial ties to the Crown Princette.

On November 2, 2013 the Tumblr blog for Tsurasia held a special art contest with the winning entry being posted on the blog and the winner being granted a Tsurasian noble title. On December 3, the winner was announced as Tumblr user tick-tock-around-the-clock (also known as Raven) who was given the title of Lady Raven, Viscount of Tsurasia.

Tsurasia now acknowledges gender neutral titles for nobility. They are the following:

Tsurasia only has a few set laws, first and foremost among them is known as Do No Harm. This refers to the central law of the kingdom - to do no harm to others. One must not discriminate against another for any reason, one must not lie, steal, cheat, slander, incite (or take part in) fighting, commit abuse or in any way harm another person or their property. Breakage of this law may result in exile from the kingdom if severe enough. Severity is determined by the current monarch along with the entire parliament who help to determine whether or not to warn the offender first or to exile them outright.

Other, more minor laws, include showing respect to the Princette and parliamentary officials as well as to, when able, offer a helping hand out during holiday celebrations and festivals.

Currently, being a peaceful kingdom, Tsurasia does not yet have a military. Though decisions are being made on whether or not to form one as a war on mosquitoes seems imminent.

Right wing combatants have threatened invasion on May 12, 2018. Chianian Soldiers, (Freikorps) have planned on an invasion, but these fears were averted when the Treaty of Tsuri was Agreed to. 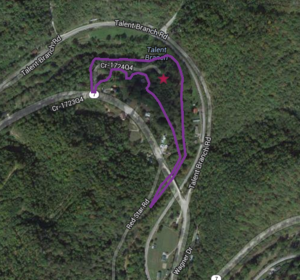 Tsurasia consists, currently, of a small mobile home, several out-buildings for storage, a natural spring, several trees, and a nearby river. It's physical home is settled within the Appalachian mountain range, climate is fairly moderate; humidity and high temps can be expected in the summer with colder temps and some snow likely in the winter months. Spring may at times bring small floods as well.

Tsurasia hosts many local resources, such as: walnuts, strawberries, raspberries, mulberries, wine berries, pawpaws, and apples. Tsurasia also contains a natural spring where fresh water can be found at almost any time of year, which can be very helpful when Tsurasia occasionally encounters the Dark Times (a loss in electricity in the kingdom). There is also a local animal population consisting of animals such as gray squirrels, raccoon, deer, fish, and possums. However, hunting is expressly forbidden within the Tsurasian border.

The river that runs at the edge of Tsurasia's borders (known as the North Fork of the Kentucky River outside of Tsurasia) is known inside the kingdom as the Veridian River for its intense green color. The forest to the southeast of the kingdom is known as the May Apple or Poppy Forest due to the abundance of May Apple and Wild Poppy plants in spring and summer.

Tsurasia has a mightily diverse culture due to being so open to so many unique people. Tsurasia greatly supports the arts and the LGBTQA+ movement as well as enjoying things such as anime and manga and many foreign cultural ideas, such as admiring ancient Egyptian culture and myth, Irish cultural customs, and Japanese culture (both modern and ancient). Tsurasia also enjoys having a close-knit community when it comes to celebrating the holidays and planning festivals.

Tsurasia's official language is English. However, there are, at times, other languages used, such as Japanese and a language known as Ancient Tsurasian that is lightly based on the language of Ente Isla used in the anime Hataraku Maou-sama, the latter being mostly used to refer to holiday names. A chart for converting English to Ancient Tsurasian can be found below. Simply take the English letter on top and convert it to the Ancient Tsurasian equivalent on the bottom. (eg 'Day' becomes 'Xac.') Ancient Tsurasian Translation Chart.

There are many forms of greeting that are common within Tsurasia - waving, high fives, fist bumps, nodding, etc. However, when addressing nobility or those of higher rank it is considered courteous to do a formal bow - one forms a triangular shape with both forefingers and thumbs and bows slightly at the waist.

Tsurasian's love their holidays and below is a list of the current official holidays in both their modern English names and their traditional names (except for World Goth Day and World UFO Day, both of which were co-opted form pre-existing celebrations and so have no traditional Tsurasian equivalent name): 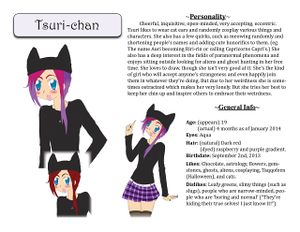 Tsuri-chan's appearence is that of a girl in her upper teenage years with aqua eyes and red hair that is long in the front (with the hair on her left side being longest) and very short in the back (though she is known to keep it dyed purple and fuchsia.) Her normal attire is a long-sleeved black shirt, star necklace, plaid skirt, black cat ear hat, and thigh highs, although it should be noted that Tsuri-chan loves to cosplay and so can be seen in almost any sort of clothing at any given time. Tsuri-chan considers herself eccentric and outgoing and other than her love of cosplay, she also highly enjoys the arts (though she herself cannot draw very well) as well as ghost hunting and searching the skies for UFOs.

Tsurasia is a mostly barter-based society however US currency is also accepted..

The Kingom of Tsurasia hosts two forms of citizenship:

Class A - Territorial Citizenship - This is the citizenship for local parliamentary officials who live nearby the kingdom and those who helped in the forming of the kingdom.

Class B - Ethereal Citizenship - Available to people seeking citizenship in the Kingdom through on-line means or who are not part of the parliament.

To gain Ethereal Citizenship, one must visit the official Tumblr blog for the kingdom, read through the laws and send a message stating that they understand and will abide by the laws, the public name they wish to use on their citizenship form, as well as information on where they formerly hailed from.

Territorial Citizenship is currently closed and only contains members of the parliament and those who helped to form the kingdom. The only difference in rights between the two is that Territorial Citizens get more of an open say on the passing of new laws that are central to the kingdom's inner workings, such as punishment rulings, land contracts, and matters of succession.