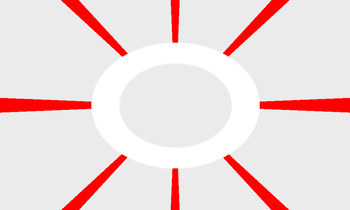 The Kingdom of Lacia was a constitutional monarchy that was completely surrounded by The Netherlands.

Many years ago, Wiebe Marten thought about buying an oil platform if he had enough money and create his own country on it what he wanted to call: Wiquwamietopolatzeflatiopionië. This was long before he had ever heard about the term 'micronationalism'. However, at some point he discovered Sealand. There was the term micronation also. of course, that was the magic word, and he found lots of information about it. When Wiebe Marten got a book from Sinterklaas about micronations in 2009, he started to develop serious ideas of beginning now, and not on an Oil Platform, but simply in his chamber at home.

Lacia was founded somewhere in December 2009 and King Wiebe Marten I of Lacia crowned himself king. The exact date of founding is unknown.

King Wiebe Marten I of Lacia abandoned the older name, simply because he was about the only one who could pronounce it correctly and because it would be difficult to get in good relations with other nations. So, after a bit of thinking, the name Lacia was used.

Since then King Wiebe Marten I of Lacia was busy creating everything related to the country: A website, a flag, a constitution, etc. However, this phase is at this point still going on: the country is far from 'finished'.

This is the Lacian Constitution as written at this point of time. More rules will follow soon.

Art. 1: Rules of Living
1.1 Murder, Stealing, and/or Harming anyone with intent are crimes and will be punished!
1.2 All Citizens and Visitors of Lacia have the complete right to say anything: This is called Freedom of Speech.
1.2.1 There are exceptions on the Freedom of Speech:
a) Using harsh Language is Forbidden
b) Disrespect of humans is forbidden.
c) Criticism may not be destructive, only constructive.
Art. 2: Behaviour against the King
2.1 Thou may address the king as 'you' rather than 'thou', and don't need to use his titles when naming him, with the exceptions of: Official Documents
2.2 Taking over the country from the King is forbidden
Art.3: Rules of Behaviour against Other Lands
3.1 We are a peaceful country, and will always try to solve problems on a diplomatic way first.

Lacia isn't a very big country, too small for most team sports. King Wiebe Marten I of Lacia, however, is a fanatic musician. He plays on his Royal Marimba very often. Also, the King really likes to play some video games. Reading is also very important in Lacia, as Lacia has a Royal Library with a large collection of documents, some are related to important state matters, others are for relaxing in the evenings.

The main food in Lacia is the so-called 'Suikerhartjes'. This is a delicacy that King Wiebe Marten I of Lacia likes very much. It is a candy in the form of a heart.

Also, there is a Royal Bell in Lacia that is used on various moments, especially on special days.

Relations with Other Countries