Not to be confused with Principality of Apia.

(Eae Kranin!) The Kingdom of Apiya is a micronation established as a project in statecraft by a group of friends in the year 2006. Currently it consists of people which share progressive views on the personal and political rights of the individual, economic liberties, protection of the environment and promotion of diplomacy over violent struggle. Aside from politics, the Apiyan Kingdom also has some unique cultural elements, prominently the Apiyan language, which itself is a few months older than the Kingdom.

According to the Code of State, the Kingdom of Apiya separates political power into three branches: the legislative, executive and judicial. It also establishes a system of checks and balances between the three branches. The institutions of the Code of State have still not been created, so the document is still merely a plan for a future government.

The official full name of Apiya is the Kingdom of Apiya, but the title of the head of state is Prince. The change of title happened with the adoption of the second constitution, which declared the monarchy to be a frenasto (frenov meaning 'king' - frenasto meaning 'kingdom') and the head of state princio (contemporary orthography: princzev, meaning 'prince'). The Code of State, which succeeded the second constitution, also specified that the head of state is the Prince. It clarifies that the reason that there is no king is due to separation of powers, i.e. there is no person who can hold all the power in the Kingdom. Per the Code of State, political power is separated into three branches, and the Prince is the head solely of the executive branch. 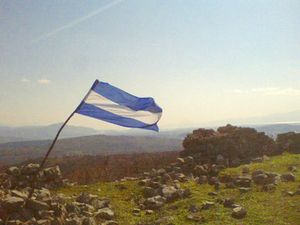 The Apiyan flag flying on the old Ottoman fort Czverka

The symbols which officially represent the Kingdom of Apiya are the flags, coats of arms and the anthem.

The civil flag of the Kingdom of Apiya is a simple triband, bicolour flag; coloured blue-white-blue. It was adopted on the 1st of July, 2008 to replace the old flag which had been in use since 2006. The Royal Family of the Kingdom of Apiya was presented with several flag design proposals, of which the blue-white-blue horizontal triband received the majority of votes. Every year, the 1st of June is celebrated as Flag day. The dimensions and colours of the flag were standardised in 2011. The official proportions of the flag are 1:2 (height:width), and the official shade of blue used is Royal blue, due to the monarchical tradition of the Kingdom. Beforehand, the proportions 3:5 and 2:3 were at times used, and a custom shade of blue existed named Apiyan blue. The civil flag is used by the people and can be used by the Kingdom's institutions. It represents the Apiyan people and the country as a whole.

The state flag of the Kingdom of Apiya is based on the civil flag, having the same proportions and the shade of blue. It is charged with a red square in the top-left corner, which has the height of two bands, or two-thirds of the height of the entire flag. The red square is charged with the coat of arms, which takes up three-quarters of the square's height and width. The design was created in the year 2010 and was standardised in 2011. It is used as the symbol of the state institutions of the Kingdom of Apiya.

The Royal standard is the flag that represents the Prince of the Kingdom of Apiya, who is the head of state and the head of government. It is also based on the civil triband, but is shaped like a square (proportions 1:1). It is charged with the Royal coat of arms, which takes up five-sixths of the square-shaped civil flag. It has blue and red fringes on all of its sides.

The coat of arms of the Kingdom of Apiya consists of a bicephalic eagle, whose feathers are coloured with a dark-blue colour. The eagle's heads are crowned with a King's crown. On its chest it holds a shield which is divided in four fields. When numbered in a clockwise manner, the first field contains a golden lion on a red background, which symbolises the Montenegrin and Macedonian heritage of the Kingdom of Apiya. The second field contains a golden fleur-de-lis on a purple background, which symbolises monarchical tradition. The third field contains a green maple leaf, rotated 45° clockwise, on a golden background, which symbolises environmentalist tendencies. The fourth field contains a white dove carrying a green olive branch on a sky-blue background, representing pacifism and the preference of diplomacy over armed conflict. The eagle has within its grasp the motto of the Kingdom of Apiya. The contemporary coat of arms was adopted and standardised on the 18th of June, 2009, by Royal decree. Since then, the government has provided the official rendition of the coat of arms.

Old piano score of the melody of the Apiyan anthem. Published in Russia.

The anthem of the Kingdom of Apiya is Tgoj, ou fratri apiani, meaning "Joy, oh Apiyan brothers" in English. The melody of the anthem was composed by Anton Schulz, a Czech composer residing in Montenegro in the 19th century. Primarily being called Ubavoj nam Crnoj Gori (To Our Beautiful Montenegro), it was used as the anthem of the Principality and Kingdom of Montenegro, with lyrics which praised Prince and King Nikola of Montenegro. It was performed premierly in 1870 and continued being the official anthem until 1918, when Montenegro was annexed by Serbia. The melody was officially adopted by the Kingdom of Apiya on the 29th of August, 2009 with lyrics in the Montenegrin language, based on the lyrics of Ubavoj nam Crnoj Gori (Royal Decree D4/09). The contemporary lyrics were written in the Apiyan language by Predrag Bogiovitch and were published on the 24th of April, 2011. They replaced the old lyrics written in 2009 with:

The official languages of the Kingdom of Apiya are Apiyan, English and Montenegrin. The English language is the working language of the Government and all of its documents have to be published in English. The royal decree which specified the official languages also specified that the Government is to use Plain English with British spelling. A guide to Plain English was provided as an annex to the decree.

Contemporary Apiyan, as it exists today, is a melting pot of Romance and Slavic grammar and vocabulary. The look and sound of the language reminds of Italian and Romanian/Aromanian/Vlach - Balkan Romance languages, whilst the declension and conjugation system is reminiscent of that in Montenegrin and similar Slavonic languages. Also, there is a tendency towards linguistic purism and the coinage of neologisms, e.x. venutrovèdènie (venutro - inside; vèdènie - view, looking) meaning interview, veroskriv (vero - true, right; skriv - writing) meaning orthography).

The following are translations of the first article of the Universal Declaration of Human Rights:

The Apiyan language is a constructed language created in the year 2006, predating the Kingdom of Apiya by several months. The first version of the Apiyan language can be described as a mostly made-up language with few elements from Germanic, Romance and Slavic languages. It had its own script, which was soon abandoned in favour of the Latin alphabet for practical reasons. The version from the period between its inception and early 2008 is called the Old Apiyan language, and at its peak looked like this:

English: What is the Apiyan Language? It is a constructed language to serve as the official language of a micronation called the Kingdom of Apiya. It is easy to learn and understand. The Apiyan alphabet has 30 letters. It also is very natural and easy to pronounce and communicate with.

It was the language used to write the first constitution of the Kingdom of Apiya, and several surviving texts, including a complete grammar and a dictionary of about one thousand words exist. Some elements of the Old Apiyan language have survived in its contemporary counterpart (hence today's name Frenasto Apiyano with its name in 2006 Fŕenastø Apiyano).

At the beginning of 2008, the language was reinvented to be more similar to Romance languages. The most symbolic change of this period was the loss of the glottal consonant ŕ (fŕenastø "kingdom" became frenastô, aŕ "one" became anno, emuŕø "it" became emo). However, the Old Apiyan language still had a lot of influence in this phase.

In the second half of the year 2008, Romance purist tendencies started to dominate the Apiyan language, which at that point sounded similarly to the Italian language. Since late December 2009, the influence of Slavic languages grew immensely, which defined the Apiyan language as it exists today.