From MicroWiki, the free micronational encyclopædia
(Redirected from Keland)
Jump to navigation Jump to search

The Direct Democratic Republic of Siberland, also known as just Siberland, is a sovereign state / micronation. It has claims on both Iowa, USA, and Toronto, Canada. It also has claims on portions of siberia and alaska although there is no-one there to enforce these claims.

The nation was founded as a merger of Keland and Woodwardia. It has a total of over 72 citizens if including Woodwardia and has many different and unique government positions. The government is weak over Woodwardia and Old Keland but new control methods are in planing.

Siberland has a simple government system. Each region votes for a governor or parliament member to represent them. A Governor and parliament vote on bills for the president to pass. Once every month or less the president gets voted in. He can execute parliaments decisions and do decisions of his own. When the president makes a decision the kaiser verifies it or vetoes it. A kaiser is only elected 60 –100 years and is mostly used for diplomacy and government decisions. The current kaiser is Mike Farmer.

In Silberland there is no law and order. Instead citizens and people in high governments form their own police system which for each person they arrest and jail they get some money. But for someone to be arrested the arrestors must have proof of that crime. The system is flawed but the kaiser of 2021 denied to fix this system twice.

The current military situation is rough. Usually whenever the country is attacked the citizens form an alliance to stop the attacker. This means the states control all the power over military other then federal government. If for some reason a war gets really bad Siberland's government will use a secret paintball drone that they got in 2017. 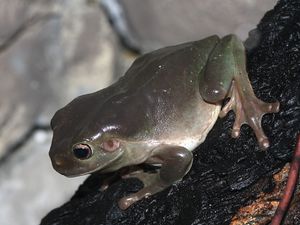 This is the most common animal. The green tree frog. Although most frogs in the area are darker.

Siberland's climate is generally cold and marshy. It is in the north, so it often snows in the winter. There have also been tornadoes and huge thunderstorms in southern Siberland.

Siberland is a part of the Gold Trade Belt, which is a trade route that goes all the way from Sweden, to Honduras. Siberland 3D prints objects and sells them in this trade belt. Siberland's biggest business is m3p printing.

Siberlands culture is Keldic (A mix of Scottish, French, and American culture). This means that Siberland's citizens mostly speak French, but English is also used. There is a public T.V. with cartoons translated to French.