The Great Kingdom of Sexistan, or Sexistan is a micronation with claims located in the Middle East and North America.

The Kingdom has strongly supported the idea of Gender Equality, or Genus Aequalitatum, hence it being written on the old flag. There is a misunderstanding where people mistake the "sex" in Sexistan means Intercourse, although it translates to gender, and the meaning is land of the sexes (genders).

The main languages of the GKS are English and Arabic. The official language is English. Arabic is a secondary language spoken by a majority of Sexistanese citizens. All legal documents, official communications, and diplomatic communications are in English.

The Great Kingdom of Sexistan has three different regions that are led by ceremonial heads that hold Noble Titles.

The Crown: The Crown - King and Queen - are the Heads of State and Government. They have full veto power on anything. If they come to a disagreement there shall be a democratic vote. They can grant pardons and appoint people for any job whatsoever. They have the ability to start or adjourn any council meeting, dissolve parliament, have the right to declare war, and have the right to veto a veto passed to veto the monarch's veto. The Crown must give Royal Assent to any bill, amendment, or state decisions.

Royalty: The Royal Family acts as the close advisors and supporters to The Crown. They represent The Crown on official engagements when The Crown is not present.

All People: Can vote, request flag and coat of arms change, can petition, can run for places in the parliament or royal family, and all other protections outlined in The Charter of Rights and Freedoms of The Great Kingdom of Sexistan.

The One Day War

Many years ago, a group of rebels stormed the Rabbiton Palace during a joint Royal-Parliamentary session and kidnapped His Majesty The King Ramy I. Through a small channel of communications, The King gathered his troops and secret service members to war. The Secret Service and Good Will of The Great Kingdom of Sexistan fought for The King and protected the royal family and Her Majesty the Queen, whilst ascertaining His Majesty's location. The rebels gave a time frame before the King was to be executed (spoiler: His Majesty was not executed).

After a long period of fighting, The King was found and returned to the nation. Everything resumed normally after, with heightened security.

On March 17 of 2016, the Queen Noor, the 1st Elected Princess and the Duchess of Rabbiton started an alliance called Rebel Alliances (RA) to overthrow the King. As a result, the Good Will of the Great Kingdom of Sexistan (GWGKS) was created to fight the rebels and prevent any harm entering the country.

All RA members were excommunicated from The GKS, and titles revoked.

The rebellion was then neutralized when Her Majesty The Queen Noor I, Her Highness Yasmeen, and Her Grace Layal dissolved the Rebel Alliances after talks with His Majesty The King Ramy I, and were all reinstated later that day, along with other members of the rebellion. All titles were reinstalled.

No rebellion has happened since, and The nation was united under The Crown.

Citizenship Application to The Great Kingdom of Sexistan

The Most Excellent Order of The Great Kingdom of Sexistan 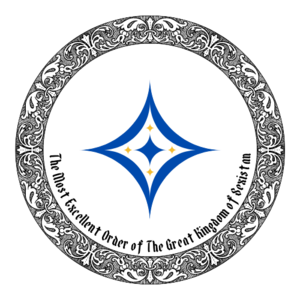 Summary: The Most Excellent Order of The Great Kingdom of Sexistan is an order that recognizes, rewards and honors those who have been of significant service, positive impact, or influence to The Great Kingdom of Sexistan. This award can be awarded to any citizen or foreigner that the Grand Master or Sovereign chooses. The Grand Master has the responsibility of choosing the recipients and their rank, whilst the Sovereign gives the approval. The award shall be a certificate, and/or medal presented to the recipient personally by the Sovereign or Grand Master.

The Charter of Rights and Freedoms 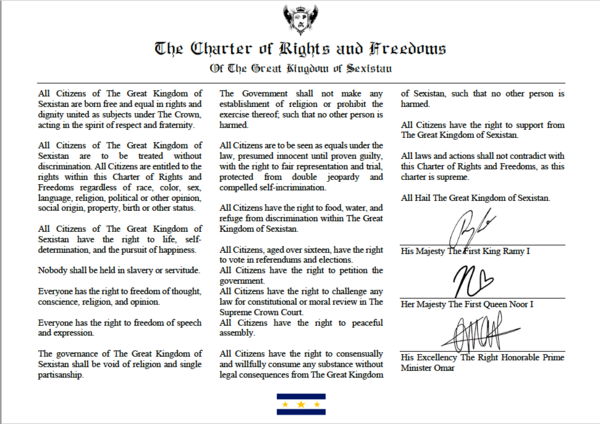