The Republic of Franslavia, in the long form Republic of French Slavs (French : République de Franslavie / République Slave de France ; Russian : Республика Франславия ; Славянская Республика Франция), is a micronation created on April 21, 2021 by the current President of the Republic, Adrien Hugé. The primary goal of this project was to create an entirely peaceful and pacifist land, despite the fact that the micronation now has an armed force.

Entirely landlocked by its neighbor France, with whom relations are very good, the micronation is inhabited by more than 89,000 people, even if this number is very imprecise. There are 31 official citizens. The territory claimed by President Hugé constitutes the city of Tours, at the heart of which is Franslavia, as well as the neighboring municipalities of Saint-Avertin, Larçay, Veretz and Azay-sur-Cher. The Franslavian Government officially controls 500 m² of this territory of more than 84 km².

The name of the capital city, "Kraymir" is a contraction of the Russian words "Kray" (край), which can mean region or country, and "Mir" (мир) which means peace.

It was in March 2021 that the project to create a micronation was launched by the SiO Party (slava i otvaga / prosperity and courage) and its President, Adrien Hugé. The idea is then to create a land that will be entirely peaceful and pacifist, thus rejecting any creation of an army. On March 30 and 31, many flag designs are created to give an identity to the future micronation. On each of the banners, the same motto: Frieden, Peace, Spokoj (Peace, Peace, Peace).

Finally, the micronation was founded on April 21, 2021, under the name of Confederation of the River. It adopts a blue, yellow, green and black flag, adorned with a dove and 12 stars. At this time, the Confederation of the River had for territory some plains around the Presidential Residence, in Veretz, which will later be renamed the Red House. The micronation was so called because the territories claimed by the President and his political party were islands on the Loire and the Cher, the local rivers. About 200 islands and islets were claimed, compared to only 9 today.

Although it was created on April 21, 2021, the Confederation changes its identity many times because its flag changes 4 times between April 21 and July 29, the date on which it changes its name. Indeed, on July 29, President Adrien Hugé renames the micronation in the Republic of Loretia, a republic which will have 3 flags and will be dissolved on August 18, after 20 days of existence. All these changes are the cause of the indecision of the President who has trouble keeping a name for his micronation long enough. The President give a nickname to his micronation, "the micronation with unstable identity".

On August 18, 2021, the Pacific Fluvetia Republic was born, the micronation that was to be the final project. It was a micronation claiming 84 km² of territory, controlling about 1 km², completely peaceful and pacifist. The colors of the nation are the same: green, yellow, blue, symbolizing a forest overlooking a beach by the river. It was during this period in the history of Fluvetia that the micronation created its first diplomatic ties. Indeed, diplomatic relations are created for the first time in May 2021 with the Social Republic of Montpellier. Since then, the ties have come undone, but this is the first real ally of the micronation.

However, the greatest ally of the Republic is the Republic of Toubak, and its President Aboubacar Touré. Diplomatic relations begin on August 20, 2021 following an Instagram Live meeting with the King of Miminosa, a now-disbanded micronation. Many economic agreements have been signed between Toubak, located in the city of Abidjan in Ivory Coast, and Fluvetie.

Even if the micronation knows prosperity and peace, it is not immune to diplomatic conflicts, and for this, President Adrien Hugé asks the different micronations to sign a treaty banning nuclear weapons on September 19, 2021 , following the conflict against the Neo-Nazi Regime of the Republic of La Vardonie. Indeed, on August 29, the Vardonese Government, which took power a few weeks before, threatened the Republic of Toubak and its allies. The ideology of Fluvetia being to attack only if the territory or an ally is attacked, the micronation mobilizes. The same day, an ultimatum is sent to La Vardonie which sends new threats, and a coalition, the U.S.M (Union to Support Micronations) is created. It brings together many micronations, but especially Fluvetia, Toubak, the Kingdom of Miminosa, the Republic of Montpellier, and also the Kingdom of Akatea and the Micro-Francophone Organization.

On August 30, the Kingdom of Miminosa declares war on the Vardonese Regime, after rising tensions. At this point, Fluvetia is still at peace. Finally, the diplomatic conflict ends after the fall of the Vardonese Government which hands over the power to the Democratic Revolutionary Group, which had the power before.

But the diplomatic crisis does not stop there. The micronational world is very unstable and a new war could break out at any time. On September 21, 2021, the Republic of Toubak made terrible discoveries. The Communist Republic of Migingo, a small micronation in the jungle of Congo, in the province of North Kivu, commits crimes against its own population. At this time, it is estimated that several hundred civilians were massacred by the army and the government, led by the terrible tyrant Tim Sopep. Following this, many micronations, but especially President Aboubacar Touré of Toubak, decided to sanction Tim Sopep. The latter then decides to declare war to all the micronations involved in these sanctions.

All the micronations go to war on September 25, following a bacteriological bombardment by Tim Sopep against rebels within his own population. The U.S.M. decides to send a commando of troops while the Republic of Toubak and Fluvetia bombard the installations of Tim Sopep. In one day of fighting, an estimated 30,000 Miging civilians died as a result of mass executions and bombing. On the military side, the U.S.M has only a few wounded, while it claims that the Sopep Government has lost around 2,500 men.

But it is the next day that the fighting is the bloodiest. Faced with the refusal of the Republic of Migingo to capitulate, the Fluvetie sends a missile from a base in Toubak, destroying a gigantic bunker which overlooks the capital of Migingo, M'Bendanoga. The toll is heavy: many generals and other important Miging figures are killed, including General Koko Makazi. The various bombardments against the Migingo have ravaged the territory, but this will allow the commando, the following day, to capture the installations. We will then discover that death camps had been built throughout the territory. Estimates of civilian casualties under Tim Sopep's regime are dire: approximately 990,000 died through torture, murder, forced labor, biological weapons experimentation and mass executions. Military losses are very low on the side of the U.S.M, but amount to several thousand on the side of Migingo, up to 23,000 according to Toubakian sources. After being captured, Tim Sopep will be executed by the population on what remains of the Place of Independence, in the capital city.

This conflict will cause a serious economic crisis within Fluvetia, which will have to review its entire system.

Following the events of September 2021, the micronation will change its identity again. On November 19, President Hugé proclaimed the Renaissance of the Eagle, which symbolized the return to the micronational scene of the micronation under the name of the Republic of Kahnesia. On November 26, the presidential elections take place, because they take place every 6 months. Unsurprisingly, the candidate of the SiO Party, Adrien Hugé, won the election with 100% of the votes.

On January 5, 2022, the micronation emerges from the crisis following the advent of the French Slav Republic. This will be followed by the attempt to form a government with a Prime Minister, an Economy Minister and a Defense Minister which, unfortunately, will not succeed after a conflict between the various ministers.

Following the terrible events that shook Ukraine in early February, Vladimir Putin's Russian Federation decided to invade the country on February 24, 2022. This aggression is very badly perceived by Franslavia, which sees a Russian threat to all of Europe. . As a result, on March 28, 2022, Franslavia, for the first time in its history, armed the territory to prevent a major armed conflict. In the days that followed, the President of the Republic of Toubak, Aboubacar Touré, decided to look into the question of rearmament of the Toubakian territory. It is following these events that the two nations sign, on April 4, 2022, the Treaty of Atlas-Kraymir, which strengthens the ties between Toubak and Franslavia. Indeed, there are diplomatic, economic, but also military issues here.

On April 10, 2022, President Adrien Hugé is strengthening his territorial defense program by organizing a live meeting on Instagram with the President of Toubak, in order to present him with Franslavian military equipment. On the same day, Hugé announced that "any pro-Putin micronation likely to be a threat to the Slavic peoples and to the French Slavic Republic, will receive a hostile and potentially dangerous micronation status, or even a declaration of war."

On April 13, 2022, the President of the French Slav Republic declares war on the Communist Republic of Redshanks. President Hugé's motivations are the threats made by the President of Redshanks against the members of the Organization of Communist Micronations on February 23, 2022, as well as the discovery that Redshanks is a dictatorship which deprives its people of all freedom and does not respect the human rights. From April 14, the fighting begins and the Redshanks War begins. Indeed, soldiers of the Redshanks are spotted in the woods of the town of Veretz, and exchanges of fire take place. The Battle of Veretz begins.

In one day of conflict, already 23 micronations are engaged, as well as 119 soldiers.

Diplomatic relations with other micronations

Only treaties in force are listed.

The Republic of Franslavia was a micronation without an army until its historic rearmament on March 28, 2022. However, it participated in two conflicts during its history:

Countries at war supported by the French Slav Republic 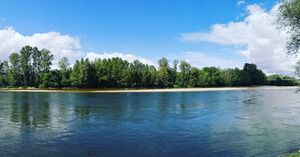 Franslavia is an archipelago on a river, which makes it a rather flood-prone micronation. But despite this, it is good to live there with its oceanic climate.

There are mostly plains and forests in the eastern enclaves, which have Veretz as their capital city. The central part is obviously made up of the capital city Kraymir, as well as the main port of the territory, Port-Sable.

Since the economic crisis at the end of 2021, the Slavic Republic of France no longer really has an economic system. In February 2022, the President nevertheless tried to appoint a Government, with a Minister of the Economy, but it failed.

It is now estimated that the State has 3,550 euros, or 3,628 dollars, and about 1,000 Soviet rubles, or 12 dollars. The micronation is therefore very poor and its GDP is even more so because the State does not have access to the industrial infrastructures of the city of Tours. However, this does not prevent its population from being happy. The inhabitants live mainly from fishing and tourism.