Danny Clarke (born 9 November 1995) is a former micronationationalist who left the community in 2015, last holding the role of Delsh First Minister for the Republic of New Dale in the Delsh-Westlandian Federal Republic and leader of the Federal Party of New Dale, Westland and Caladonia. He represented the Republic of New Dale as its Member of the Federal Parliament (MFP) before the disestablishment of the republic and the federation.

Born in Chertsey, United Kingdom and having formed the Dale Empire as early as 2009 and returning the Empire back to the United Kingdom in 2010, before reinstating the country as the Independent State of the Dale Empire later in 2010 the same year and only a few months between the two countries before renaming it as the Kingdom of the Dale Empire in 2011. Danny is best known in the MicroWiki community for the Dale Republic, the successor of the Kingdom of the Dale Empire. However, the Dale Republic eventually collapsed and eventually took the form of the Republic of New Dale, but a lack of internal activity led to an agreement which was reached with the Republic of Westland suffering from a similar problem. This led to the creation of the Delsh-Westlandian Federal Republic with Danny as its first President. 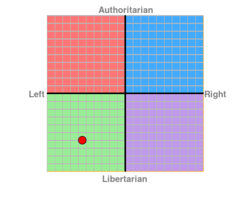 One major reason for Danny Clarke's creation of the Dale Empire and being willing to allow the transition into the Dale Republic was due by a large majority by his interest in politics which he developed during 2011 especially during a Woking college taster day where he tried politics and discovered a massive interest and knowledge of politics compared to everyone else who took the taster day. When Danny Clarke founded the Kingdom of the Dale Empire on the 22nd May 2011 he was a monarchist. However, as he developed and interacted with those from other political back grounds he developed Socialist and even some Communist ideals which reconnected him with previous communist ideals he had earlier in his life.

When the Republic of New Dale was created it began as a direct democracy. However, Danny who did not strongly support this form of government had long planned a transition into a representative democracy which he viewed as more efficient then a direct democracy. When the Republic of New Dale jointly created the Delsh-Westlandian Federal Republic, Danny initially intended to remain an independent as a result of the instability of the Dale Republic due to its weak party politics. However, shortly after the admission of Caladonia into the federation he co-founded the Federal Party of New Dale, Westland and Caladonia, a center-left part, similar to the Caladonian Green Party, with the two discussing merging at one stage, however this idea was rejected to best ensure Westland was not marginalised in the Federal Parliament by what would have been the federations dominant party as a result of any merger.

Since leaving micronational politics Danny has remained firmly interested in politcs focusing on British, American, European and Canadian politics in particular. In the lead up to the UK's 2017 snap General Election Danny heavily suggested that he could likely intend to run in a 2022 general election if certain conditions were met, namely his continued residence in the UK and the re-election of Jonathan Lord, conservative MP for Woking, the latter condition already being met, but he would not run in a potential further snap election following the hung parliament that was created as a result of the election.

On 29 March 2019 Danny submitted his nomination forms which once approved would put him on the ballot in the Woking Borough Council elections standing as a Green Party paper candidate, this would be the first election he has stood in since the Dale-Westland Federal Elections in January 2014, and his first official return to politics since July 2015. On 4 April 2019 it was officially confirmed that Danny would be one of six candidates standing in the Pyrford Ward in the Woking local elections, the ballot included candidates from the incumbent Conservative, Liberal Democrats, Labour, UKIP and an independent candidate.[1][2]

Below are explanations of the stance held by Danny Clarke regarding each topic and are solely a matter of opinion and may include hypothetical or fantasy situations for the purpose of explaining these positions.

Support: Danny's support in the European Union lies in the idea that a UK outside of the EU would be unable to compete as well as an individual nation, in comparison to within the EU, against the rising economies such as Brazil, India and South Africa, let alone the pre-existing and established economies, including that of continued EU members, of the United States of America, China, Japan, Germany and France and rejects the idea of the UK outside of the EU completely due to the uncertain future which has never been properly explained by any political party or group supporting leaving the EU and this lack of oversight is only likely to make the situation worse for the UK. Danny remained a supporter of a second referendum for the duration of Brexit negotiations and participated in the October 2018 People's Vote March in London walking with other Green Party members in a demonstration that totaled an estimated 700,000 people.

Support: Danny's support towards a English Parliament is by no means related to any idea of English nationalism, a position he strongly rejects, or the English Democrats political party, instead support for an English Parliament is part of his support to the Federal Monarchy idea, four or more equally powerful legislatures below a new and equally divided unicameral British legislature as part of a federal system while retaining the Monarchy and perhaps the fairest answer to the West Lothian question.

Support: Danny's support in a Federal Monarchy, replacing the current unitary parliamentary constitutional monarchy. The idea revolves around the disestablishment of the current House of Parliament, both Commons and Lords, and instead establishing a new unicameral British legislature with equal distribution of seats determined by the number of second-tier subdivisions, at least four, England, Scotland, Wales and Northern Ireland but could be extended and create additional second-tier subdivisions for culturally or politically unique locations such as Cornwall or Greater London. These second-tier subdivisions would then operate equally powered legislatures linking to Danny' support towards the creation of an English Parliament.

Impartial: Danny has neither support nor opposition towards the British Monarchy and would unlikely display either case unless a situation was unavoidable. However, Danny does not see any reason to remove the British Monarchy unnecessarily, displayed in his idea for continued inclusion of the monarchy in the creation of a Federal style government because he sees no reason to remove it when the monarchy does not need to be removed in order to establish the federal style government for the UK.

Danny Clarke has failed to establish a football career in England or in any Dale micronation. Danny has been associated with Every Dale national football team but has failed to both successfully host nor feature in any fixture. Danny has always been considered the Captain of the Dale national football team with his role both undisputed and unchanged between any planned fixture.

Danny's first real world team was his work's 6-a-side team, Milestone T.P.F.C., which was formed after his employment helped to give the company enough players to feasibly play. The team representing the transport planning company debuted on September 21, 2016 against another transport planning company. While Danny had historically considered himself more of a central midfield player or winger, he was instead positioned in a forward position citing his comparable fitness and age compared to his colleagues. The game ended in a 3-3 draw, with the 2nd game not played until February 2, 2017, which saw Milestone T.P.F.C. winning 7-6, Danny failing to register any goals for the second game in a row, but assisted in 2 goals and made a number of attempts at goal, a third game is being considered for late 2017.

Danny has long considered being more involved with playing football at some level and has recently contemplated Sunday league football with the intention of playing at least 1 fixture for the Surrey representative football team he founded.

Danny is an avid football supporter, primarily supporting Liverpool Football Club, Football Club København and Montreal Impact of the Premier League, Superliga and Major League Soccer respectively, although exact degrees of support may vary between clubs because of limit information or news related to the leagues and clubs that is available in the UK. Originally a Chelsea FC supporter for family reasons, he eventually converted to Liverpool FC when he began a true interest in football. Danny's first involvement with macronational club football materialized while organising the Surrey-Sealand fixture. This came in the form of taking over the website of Westfield Football Club, a local club competing in the Combined Counties Football League.

As well as Westfield FC, Danny spent time working with the Sturridge Football Academy, as the website designer. Danny left both roles at the end of the 2016/17 season to focus on new endeavors. Danny has attempted multiple efforts to try to bring non-FIFA international football to Surrey with International Surrey Football which he founded and runs. The team successfully took to the pitch for the first time on May 6, 2018 when it played its debut against Barawa, a game the team won 3-1.

Danny has since 2013 led efforts to establish his own football club. Firstly with Dale Football Club between 2013 and 2016 which was spearheaded by its parent group Mydalefc in a bid to emulate a system similar to that of myfootballclub.co.uk which previously owned Ebbsfleet United. In 2017 Danny revitalized this attempt now with Weybridge Football Club to be located in the Surrey town of Weybridge and plans to return Combined Counties football to the town for the first time in almost 30 years. As well as this Danny has considered attempting to complete his coaching badges as another means of being more involved in football including a potential to coach the Surrey representative football 'B' team.