From MicroWiki, the free micronational encyclopædia
(Redirected from Commonwealth of New Pristinia)
Jump to navigation Jump to search

The Federated Commonwealth of Pristinia (abbreviated FCP; de: Föderiertes Commonwealth von Pristinia; fr: État-des-tous Federale de Pristinia; prla: Res Publica Pristinia Nova) was founded on Tuesday, 1 December 2009 upon the abdication of former Emperor Frederic I of Pristinia. Constitutionally, the fate of Pristinia's territories thereby fell into the hands of The Most Venerable Marco Dresner, then Head of the IGA. He decided to make the former Empire a Free People's State, but instead of going by that name rather made it a Commonwealth.

In the beginning of December 2009, the then Emperor abdicated, sending this message to all Pristinians via email:

I hereby officially abdicate and resign from my offices as Emperor of Pristinia, King of Great Berkeley and King of Fredericton. Therewith abolished are all Duchies and other compartments within those regions. According to the constitution of Pristinia, this means that all the powers I currently have in my various functions within our proud nation go to the Head of the Interim Government Party, created for this sole purpose in the beginnings of our nation. Aforementioned Head of said Party is currently our valued citizen Marco Dresner. I shall leave it up to him how to restructure Pristinia.

Furthermore, I would like to inform my valued friend and ally, HI&RM the Emperor Wilhelm I of New Europe, that this is no revolution in the sense of the Pristinian-New European Alliance, which is hereby also made void - I am sorry to not be able to keep to the 3 months deadline, but by this abdication the Empire of Pristinia does not further exist; therefore, this is an extreme case and not really an ending of the Alliance, merely an extinction of one of it's members.

The reasons for my resignation are manifold. Most importantly, I do not feel I have done the people of Pristinia much well; I have declared war unnecessarily on innocent nations, I have made wrong decisions all over the place, and I have not been much supportive of the people. Second of all, I have no access to the online Micronations Wiki, thus I am incapacitated in a severe way of carrying out diplomacy with other nations.

I wanted to apologize to Mr. Robert Lethler, and the entire micronational community should you feel there has been any harm or damage done. Apart from that, I wish whatever our nation may be in future much luck, and hope nobody will leave it (except for me, I wouldn't be very well regarded probably).

Parties are currently being formed. Of course, there were block parties in the old Empire, them being 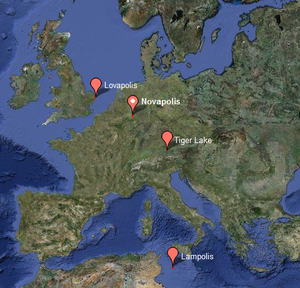 On 27 December 2009, Marco Dresner began restructurising the Empire, removing and adding claims. So far, he re-defined the former Pristinia City territory (which had, in the meantime, become Nova City) and renamed it Novapolis. He annexed some of the greater area of Lowestoft and Oulton Broad, mulcting the United Kingdom of its famed "most easterly point". He redefined the Tegernsee territory and renamed it "Tiger Lake". He also annexed the formerly Italian island of Lampedusa without Linosa and Lampione, thus not only mulcting Italy of its most southern point but also mulcting illegal African immigrants of their entry point to the EU.

Official languages are German, English, French and Pristinian Latin. There are a few other recognised languages.

Ripuarian is mainly spoken in Novapolis. A few language examples are listed below:

Main article: Foreign Relations of the Federal Commonwealth of Pristinia

So far, two micronations have been classified as "Villain States" by the Pristinian government: