From MicroWiki, the micronational encyclopædia
(Redirected from Wound Badge)
Jump to navigation Jump to search

The Wound Badge differs from all other decorations in that an individual is not "recommended" for the decoration; rather he or she is entitled to it upon meeting specific criteria. A Black class of the Wound Badge is authorized for the first and Second wounds suffered under conditions indicated above. A Silver Class is awarded for 3 or 4 wounds, or for only one wound if it involved brain damage, facial disfigurement or the loss of a hand, a foot, an eye, or hearing. A Gold Class is awarded for 5 or more wounds, or for a single wound if it resulted in blindness, "loss of genitalia,", or total disability. Not more than one award will be made for more than one wound or injury received at the same instant. A "wound" is defined as an injury to any part of the body from an outside force or agent sustained under one or more of the conditions listed above. A physical lesion is not required, however, the wound for which the award is made must have required treatment by a medical officer and records of medical treatment for wounds or injuries received in action must have been made a matter of official record. When contemplating an award of this decoration, the key issue that commanders must take into consideration is the degree to which the enemy caused the injury. The fact that the proposed recipient was participating in direct or indirect combat operations is a necessary prerequisite, but is not sole justification for award.

Injuries or wounds which do not qualify for award of the Wound Badge include frostbite or trench foot injuries; heat stroke; food poisoning not caused by enemy agents; chemical, biological, or nuclear agents not released by the enemy; battle fatigue; disease not directly caused by enemy agents; accidents, to include explosive, aircraft, vehicular, and other accidental wounding not related to or caused by enemy action; self-inflicted wounds (e.g., a soldier accidentally fires their own gun and the bullet strikes their leg), except when in the heat of battle, and not involving gross negligence; post-traumatic stress disorders; and jump injuries not caused by enemy action.

It is not intended that such a strict interpretation of the requirement for the wound or injury to be caused by direct result of hostile action be taken that it would preclude the award being made to deserving personnel. Commanders must also take into consideration the circumstances surrounding an injury, even if it appears to meet the criteria. In the case of an individual injured while making a parachute landing from an aircraft that had been brought down by enemy fire; or, an individual injured as a result of a vehicle accident caused by enemy fire, the decision will be made in favor of the individual and the award will be made. As well, individuals wounded or killed as a result of "friendly fire" in the "heat of battle" will be awarded the Wound Badge as long as the "friendly" projectile or agent was released with the full intent of inflicting damage or destroying enemy troops or equipment. Individuals injured as a result of their own negligence, such as by driving or walking through an unauthorized area known to have been mined or placed off limits or searching for or picking up unexploded munitions as war souvenirs, will not be awarded the Wound Badge as they clearly were not injured as a result of enemy action, but rather by their own negligence. 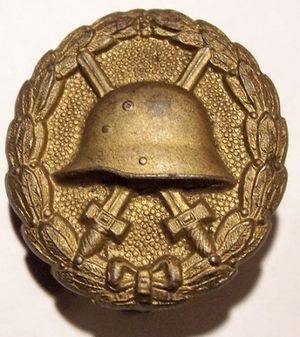 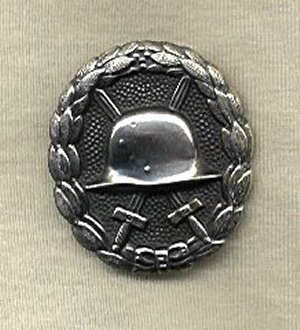 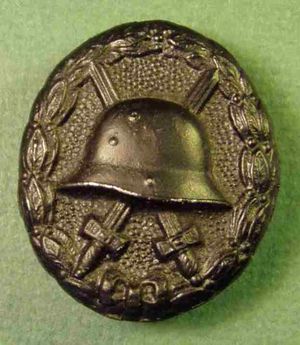