The Union of Artaghe (Artaghean: Sttåmbloþúr Ártæg; Spanish: Unión de Artague), pronounced /ɑrːˈtædʒiː/ or /ɑrːˈtædʒ/ was a short-lived micronation in the Valtir Sector established on 1 June 2012, shortly after the dissolution of the State of Dakrit. During its short existence, it was one of the most internally active micronations the Sector had seen, holding multiple free democratic elections and establishing a functioning government, as well as engaging in cultural projects such as the creation of a conlang in collaboration with Kossian experts. Externally, the Union was active in several intermicronational organizations, such as the Union of South American Micronations and the Vanguard Powers.

The Union was the largest micronation in terms of territory the Sector had seen since the First Berinese Empire, and the first to develop a serious conlang. Retrospectively, Artaghe is considered one of the "best" micronations of the Valtir Sector before the creation of Sabia and Verona. It created the base for the establishment of a stable, democratic and open micronation in the Sector. In many occasions, the Union has been called the "Golden Age" of the Valtir Sector, a position that has been reversed with the success of the present Sabia and Verona. 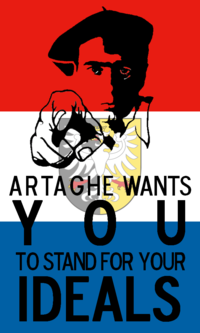 The Union of Artaghe was established as a successor to the failed state of Dakrit (also spelt Dak'krit), a short-lived project that revived Pahunism and established an organized religion out of it. Dakrit had been established after the fall of New Balland, aided by its First Minister at the time, Tarik Kârjasary. Kârjasary led the effort to establish the Union, calling for the first meeting of the Union Parliament (Sttåmbloþing) on 1 June 2012, when the Union declared independence from Venezuela.

The Union claimed a territory much larger than that of recent predecessor states. At the first Union Parliament meeting, Runa-Lisandra Bartolucci was elected President of Ataghe and Kârjasary became Prime Minister. The development of the Union's democracy was aided by other micronational politicians of the Valtir Sector such as Isadora Annenak and Aina Oehler, and external micronationalists like Liam Barnard and Lucas Campos.

To cement the new micronation's stability, and avoid the fate of its multiple predecessors, the Artaghean Sttåmbloþing appointed Jonathan, Crown Prince of Austenasia, as High Commissioner of Artaghe. The High Commissioner would oversee the Union Government's actions and advise the Prime Minister on matters of state. The young nation became involved in the intermicronational projects of the Union of South American Micronations and the Vanguard Powers.[1]

The development of Artaghe greatly advanced thanks to the creation of Artaghean, a conlang devised by Tarik Kârjasary and Lucas Campos of Koss. The language was promoted by the creation of the Union Congress for the Development of Artaghean Studies (SOAS). The graphic design firm Inðurkrær þårnakul (later known as RA&V Artworks) was also created, promoting Artaghe abroad. On 1 July 2012, after the first presidential elections were held, Aina Oehler took office as the second President of Artaghe, succeeding Runa Bartolucci. Oehler's presidency got off to a rocky start when High Commissioner Jonathan resigned his post on the advice of Austenasian Emperor Declan I, II & V, straining relations between Artaghe and Austenasia.

Oehler was succeeded by Liam Barnard, who became the Union's third president on 1 August 2012. Barnard's presidency was characterized by thorough reforms that included the merger of the Presidency and the Sttåmbloþing to form the Union Presidency, a rotating three-member directory which consisted of Barnard, Oehler and Kârjasary. The Union Presidency attempted to save the Union from extra bureaucracy and stagnation, but it slowly descended into inactivity. On 5 August 2012, the Union bought the territory of North Todd, enclaved in Todd County, Kentucky, from the Federated Republics of Flatland. Stifled by inactivity, on 18 August 2012, Kârjasary declared himself Prince of Artaghe, dismissed the other members of the Presidency and established the Principality of Artaghe.

The flag of Artaghe was chosen by the Parliament of Artaghe on 1 June 2012, the day the Union declared independence from Venezuela. It was formed by three horizontal lines of equal size, of lust red, white and blue, with the national coat of arms in the centre. The flag was supposed to represent the ideals of happiness, freedom, equality and perseverance. The coat of arms was a faithful historical adaptation of the coat of arms of the Archduchy of Montriac, a predecessor of Artaghe and province of the Kossian Empire.

An important aspect of the Artaghean culture was its language, a conlang designed in similarity to Nordic languages, specifically Icelandic. The Nordic inspiration for the Artaghean language was an echo of the Faryaese Zealandian dialect used in Faryar, one of Artaghe's predecessor states.