The War on Micronational Communism, officially named Operation Leningrad-II by the Erusian National Communist Party, was declared by the Democratic People's Republic of Erusia on the Kingdom of Murrayfield June 22, 2009. The war began when the Democratic People's Republic unilaterally declared a state of conflict between the two states in the aftermath of the Murrayfield Civil War, which saw the end of Communist rule in that micronation. A unilateral ceasefire was declared by Erusia on June 23 and matched by Murrayfield almost immediately after - the war itself is ongoing, and both sides have made it clear that the mutual ceasefire is a de facto one and will not apply to allies joining the war. Late on June 23 both POHMB, People's Republic of Yongheng, and Sandefreistikhan entered the war - so far, POHMB, their allies, and Sandefreistikhan are the only micronations not abiding by the terms of the ceasefire. Sandefreistikhan will not abide due to the reason that this is a personal war for them.

On June 23, the Erusian government acquired evidence that the entire war head been staged by nations such as Camuria, POHMB and Althacia in order to destroy Erusia. Please see War over Micronational Communism/Erusian Intelligence for the record. The war between Murrayfield and Erusia came to an official conclusion on June 25, with the restoration of the Communist government in Murrayfield. Shortly after, Murrayfield joined the war on the side of Erusia and her allies.

On June 23, 2009, the Central Committee of the Erusian National Communist Party formally condemned Ben Lawson and the former Murrayfield communist party as "counter-revolutionaries who... have seriously threatened the stability of the micronational socialist movement" and declared war on the new Kingdom of Murrayfield.

Shortly after the Erusian declaration, King Benjamin I of Murrayfield responded with a declaration of war on Erusia, restating the advice of Chancellor Metatorik of POMHB, who said, "Communism doesn't work."

On 23 June 2009, the United Empire of POMHB officially declares war on Erusia and put the IRPA on full alert. Chancellor Metatorik is the one who issued the declaration of war and he is strongly supported by EVERY member of the Imperial and Royal POMHBese Government. Emperor Timmotorik I has issued an order stating that communism is "evil and must be obliterated". The POMHbese are very enthusiastic about fighting against the communist Erusia. The UEP's allies (Grand Duchy of Sachsen-Mura, Principality of Lwaii , and Principality of New Ribonia) have been brought into the conflict on the POMHBese side (see: Unterkassel Alliance). Until they POMHB declared war, the conflict had come to a temporary halt as the two sides actively worked to negotiate - as such, POMHB is directly responsible for the resumption of hositilities. Given past assurances by POHMB's predecessor that they were committed to neutrality, the declaration of war has been seen as a "childish and hypocrtiical move by a group of warmongering fools". In response, the People's Republic of Yongheng joined the war to support Erusia.

Response of the Baltian Sector

Chancellor Metatorik has, on 23 June 2009, issued declarations of war against the People's Republic of Yongheng, Cheslovia, Malokaz, and Sandefreistikhan. When asked about the war, Metatorik stated: "I hate nations who think that they can force their beliefs on other nations by declaring war on them in order to force them to change for the worse. We (the UEP an allies) are here to defend Murrayfield's right to choose it's own government."

His Majesty Guillaume le Premier condemned the UEP for "placing harsh laws on all Communists in the UEP" calling the act "discriminatory" and hurtful. He also continued to state that such actions will hurt future Sandefreistikhan-UEP relations. At 19:07 ST, the Lama also declared sanctions on the UEP. All trading between the UEP and Sandefreistikhan must end, as well as all formal talks, treaties, and alliances will be terminated and be put on hold, and that the UEP will not be recognised by Sandefreistikhan.

On June 23/24 the Republic Guard, the security service of the Erusian government, received information from Murrayfield that the "Micronational Advise (sic) Bureau" had convinced them to abandon Communism and form a new government. This information came following the first round of peace talks between the Erusian and Murrayfield leaders. Murrayfield blamed the Bureau for the war and said he strongly suspected that this had been their plan all along, with the two leaders coming to the conclusion the Bureau was likely a front for POHMB and her ilk. Shortly thereafter the Republican Guard launched an intelligence operation against the Bureau and, with his consent, posed as Itakur Kiwal offering to launch a counter-revolution. The conversation record is available on MicroWiki and both POHMB and the Bureau were immediately banned pending discussion. 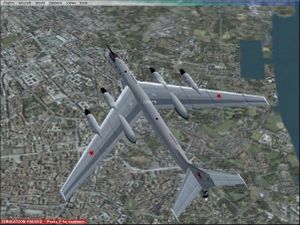 On 23 June 2009, at around 20:30 ST, the Tupolev Tu-95 "Bear" of the Sandefreistikhan Air Defense Force (Fr: Force défense aérienne) ordered and launched Training bombing raids over the Kingdom of Murrayfeild and the UEP. Lama Guillaume le Premier declared the training raids a "success" and ordered the Tu-95 back to Aimer ADFoSB.

King Ben I of Murrayfield condemns Sandefreistikhan for launching training raids over Murrayfield as only escalating tensions during these delicate talks and ceasefire. He calls on them not to increase tensions and hostilities by doing such acts.

His Majesty Guillaume le Premier, in reply to Murrayfeild-Erusian peace talks, has asked to be admitted to the talks and investigate on the purpose for the war. He continues to state that Sandefreistikhan shall make the Micronational War on Communism a lower priority, and making the Sandefreistkhan-Iran Neda War the higher priority. He also seeks peace talks with Murrayfeild, as Erusia has declared an end to fighting.

On 25th of june 2009 Murrayfield returned to communism aftyer discovering the Micronational advise bureau was a sham run by Camuria and her allies who had manipulated him into abandoning it in the first place. Murrayfield quickly made peace with Erusia and joined the pro communism side vowing to continue the fight against these imposters and terrorists whos only goal is to cause tension and violence in the micronational community.

On 26 June 2009 the Empire of New Europe declared war on all Anti-Communist belligerents. For many this comes as quite the shock due to the "Cold War" between Erusia and New Europe. Many believed New Europe would never fight for a communist state. But the Kaiser made this statement. "It is much against New European interests that Erusia should be defeated. For the sake of imperial and ideological security, New Europe enters this war to protect this micronational community from intollerance and inexcusable reasons for lies and war." (original statement made in German)

Sandefreistikhan asks for Forgiveness from Murrayfield

Template:Country data Larger flag.png Democratic Duchy of Francisville - despite more alliance with the nations of the communist side, will not destroy constitutional neutrality by joining and aims for a peaceful solution. Template:Country data Imperial Flag.jpg Ohio Empire - alliances on both sides; refuse to fight over economic principles Template:Country data Vlag.jpg Grand Duchy of Flandrensis - hopes that both parties will negotiate in peace. Template:Country data Antarctico londaise.png Crown Principality of Landashir - "Landashir refuses to support or condemn any conflict, no matter how big or small. Every form of government has its pros and cons. Communism needs not be spat upon, nor accepted. There has never been, the special or best form of government. --Cplandashir 20:03, 29 June 2009 (UTC)" <<HRI James II in discussion with the Micronational Advice Bureau.>> Template:Country data Coleraine flag.png Kingdom of Coleraine - has laws barring the creation of both Communist and Fascist parties in connection to traditional Gaelic law which forbids any form of political power other than a Tanist (Monarchist) system.