The Wall of Flags is much like the Versailles' Hall of Mirrors, on the wall there are 4 flags. The Wall of Flags is located in the Palais du Dormir in Sandefreistikhan. These flags are of Switzerland, the United Kingdom, Tibet, and France. The Lama displayed these because they are the model nations of Sandefreistikhan. On June 24, 2009, the Swiss flag was removed and the Soviet Flag put up, as showing the Switzerland is no longer a model nation to Sandefreistikhan and the USSR and current Russian Federation is. 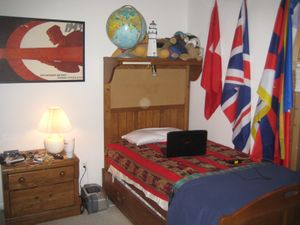 The Wall of Flags, on the right.

Removal of the Swiss Flag

Addition of the Québec Flag