From MicroWiki, the micronational encyclopædia
(Redirected from Varinian Florin)
Jump to navigation Jump to search

The Varinian Florin was during its brief independence the national currency of the Kingdom of Varina. First introduced on April 16, 2013, its purpose was to replace the former micronational currency used by Varina, the Ultamian Katane. The Florin was divided into 20 Silver, then divided into 10 Copper. Unlike the Katane, the Florin was actually less valuable than the United States dollar, to which it was pegged at the value of 40 cents ($0.40), or 20 Taneda (K0.20). Additionally, the currency had eighteen instead of twelve denominations. These alterations were designed to make the trading of micronational goods easier. The Florin was declared the official currency of Varina on April 20, 2013. 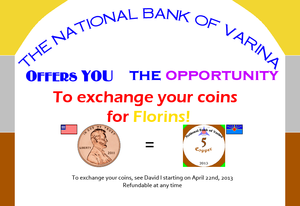 An advertisement for currency exchange between USD and VAF made on April 17th, 2013.

Florin coins and bills were square and rectangular, respectively, and were composed of a white area, in a circular shape along the sides, on top of a background color corresponding to the denomination "group" of the bill. There were four groups of bills, Copper, Silver, Gold, and Platinum. While the Copper and Silver groups are derived directly from their subunit, Gold and Platinum were split at the 100 Florin note, which has a platinum background.

Each denomination had a certain background and color combination. This second color was found in a triangular shape along all four corners of the denomination, and had the purpose of easy identification in a stack or wallet. In a certain group, the lowest denomination had red. From there, the pattern went blue, green, yellow, purple, and orange.

Florin coins carried the denomination in the center, the coat of arms and bank on the top, and the minting year on the bottom. Unlike most coins, this face represented both sides of the coin.

The background design of the bills was the white circle of the coin extended horizontally. The obverse carried the coat of arms and bank name along the top, denomination name in the center, a serial number on the left, and printing date at the bottom. The serial number, in the format #######, designated that that bill is the nth one of its denomination printed by that bank. Thus, the first 10 Florin bill ever printed by the National Bank of Varina, for example, would have carried the serial number NBV-0000001. The reverse carried the same denomination name, positioned left, with a black-and-white picture to the right with the national motto, Victoriam per lumen, arced above the denomination. Pictures that were to be used for the bills were taken on April 16, 2013 and featured all three territories of Varina as well as King David I.

No currency of the bill format was ever produced.