Thanks King Wallace of Archland

Greetings from Lomellina to Commonwealth of Vyktory

Is it with most honor that I, D. Guilherme da Lomellina e Berenguer, prince of Lomellina, 1st duke of Scandia Colles and 1st count of Ross, propose a mutual recognition and perhaps other diplomatic affairs between our nations.

Welcome to the Order

I am here to propose the creation of an intercontinental alliance that will include some micronations that the principality of lomellina keeps relationships.
The goal of this alliance would be to establish a greater connection between all micronations included, may there by, have a greater help from them. Subjects would then be discussed in a specific chat room, where the leaders of micronations could discuss among themselves matters of general interest.

The micronations included in the alliance would be:

I am here to inform the establishment of Intercontinental Micronational Alliance (IMA), soon the Assembly (chatroom) will be created and sent to each member state, also elections will take place somewhere arround this week.

The Assembly was created 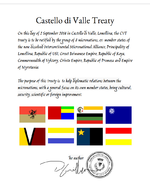 IMA was dissolved due to bad criticism, we will turn this into a Treaty Alliance (Castello di Valle Treaty)
--AGMVieira (talk) 14:13, 2 September 2014 (BST)

Our Kingdom are interested in keep in touch with your micronation. If you're interest in a treaty of mutual recognition, it would be a pleasure for our peolpe and government.

You've been blocked for 48 hours for blanking pages. If you want an article deleted, place a deletion template on it. Blanking several articles is simply vandalism. Austenasia (talk) 08:19, 20 February 2015 (UTC)

My name is William Timothy (or Que Wu-huang). I'm the Emperor of the Imperial State of Shengli.

And also I'm interested to had diplomatic relations with your micronation (Commonwealth of Vyktory). Please reply this message as soon ass possible.

NO NEED, SHENGLI HAS BEEN DISBANDED

Thank you for your answer. If you can, I can send to your email a treaty of mutual recognition if you tell me your e-mail adress.

Oscar of the Ruthenians.