From MicroWiki, the micronational encyclopædia
(Redirected from User:Erasmas Underwood)
Jump to navigation Jump to search

Axel Nielson (March 31, 1994 – September 19, 2012) was the first Minister of Foreign Affairs for the Kingdom of Theodia. Formerly known as Erasmas Underwood, Axel was involved in the micronational community from late 2010 until his death in mid-late 2012.

Axel's positions were influenced by many historical figures and writers, as well as discussions and debates with friends, family and peers. By definition, he was a Libertarian on the Conservative end, believing that all human beings have limitless rights so long as they do not interfere with the rights of another. Such a society, said Nielson, is founded on a respect for Negative Rights as promoted by Ayn Rand and other Libertarian thinkers—that is, rights are defined by what one is free to do without interference (life, liberty, property and the pursuit of happiness), not by what others are obligated to provide/do for you (welfare, handouts and entitlements). Such "Positive Entitlements," according to Nielson, demand the violation of the Negative Rights of others in order to be fulfilled.

A strong proponent of John Locke's Social Contract, Axel believed that a legitimate government is formed by the mutual understanding of its citizens with regard to how the government should be executed. In the State of Nature, Locke stated that all men are free, but in this absolute freedom there is no security to protect against transgressions. Thus, it is argued, a state is needed to protect the rights of every individual, and in creating such a state, a minimal amount of freedom must be conceded to allow for such a service to be provided. However, Axel agreed with Federalist 10[1] by James Madison, which states, in part:

From this view of the subject it may be concluded that a pure democracy, by which I mean a society consisting of a small number of citizens, who assemble and administer the government in person, can admit of no cure for the mischiefs of faction. A common passion or interest will, in almost every case, be felt by a majority of the whole; a communication and concert result from the form of government itself; and there is nothing to check the inducements to sacrifice the weaker party or an obnoxious individual. Hence it is that such democracies have ever been spectacles of turbulence and contention; have ever been found incompatible with personal security or the rights of property; and have in general been as short in their lives as they have been violent in their deaths. Theoretic politicians, who have patronized this species of government, have erroneously supposed that by reducing mankind to a perfect equality in their political rights, they would, at the same time, be perfectly equalized and assimilated in their possessions, their opinions, and their passions. A republic, by which I mean a government in which the scheme of representation takes place, opens a different prospect, and promises the cure for which we are seeking.

As such, Axel supported a Republican form of government (not to be confused with the American "Republican" Party), where each individual's rights are held dear.

Moreover, Axel Nielson openly condemned modern society's division of humans into classes, arguing for the total abolishment of using adjectives to grant rights in a political context. For example, in his view, it is wrong to say, "All persons have the right to marry regardless of sexual orientation." Rather, the sentence should be cut off earlier: "All persons have the right to marry, period." This is taken to the extent that Axel proposed outright removing state sanctions on certain types of individuals or groups and allowing for a completely fair playing field for all. That is, he supported removing institutions such as state-sanctioned marriage, which is a means of control by subsidising one way of life and, by necessity, putting all other forms at a disadvantage. Rather than bringing all persons into that institution, then, Nielson wished to remove the institution altogether—if individuals want to live together and say they're married, let them, but why should the government be involved, and why should they receive special treatment for it? 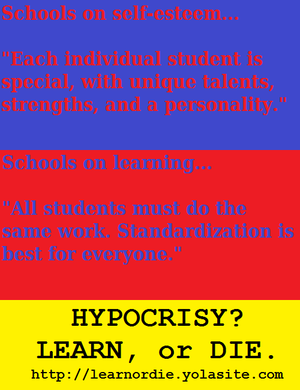 Finally, Axel promoted an unusual educational policy embodied in the movement known as LEARN, or DIE,[2] which he began. Essentially, LoD states that educational success (i.e. grades) should be based on how much the student learns, not how hard he/she tries. In other words, tests should define the final outcome of grades and GPA, not homework. This shouldn't discourage teachers from assigning homework, though, as it is good practice for the test—but it is wrong that a student can prove that he/she has learned all of the required material and still fail or receive a low grade simply because they didn't do homework—which become tedious forms with no benefit, if the student obviously did not need them. It is, then, the outcome of education that's important, not the means. Every individual learns differently, and it is a strong contradiction of the "everyone is unique" mentality that all students should be forced to learn in the same way.

A brief overview of Nielson's platform is as follows.

1. Government should be minimal.
2. Individuals have Negative Rights.
3. No one owes you anything.
4. The goal of education is to educate, not to force conformity.

Axel was a known Panendeist, having publishing many articles and papers on the subject and often found discussing and debating religious issues on the World Union of Deists' Facebook page. As a Deist,[3] he believed that the Universe was created by a Supreme Being (often called "God"), and that this belief is grounded in reason and logic, not holy books or revelations. In fact, Axel believed that miracles do not happen, the Creator never intervenes, and that man's only way of knowing the Creator is through observation of the natural world and the application of "God-given Reason."

One of Axel's papers, The Value of the Universe,[4] argues that this situation also provides the greatest potential for increase in value to God. By dividing into smaller bits—imperfect little blips of consciousness—God might evaluate himself, and, through constant value trade-offs, increase the value of the Universe to individuals and, thus, God to Himself.

Nielson was strongly influenced by writers from the Golden Age of Deism—the Enlightenment Era and after. These included Voltaire and Thomas Paine (especially his work, The Age of Reason), as well as many ancient texts, such as Lao Tzu's Tao Te Ching. Growing up in a deeply Christian home, he struggled for years with questions regarding the Bible and the concept of revelation in general. After years of soul searching and research, he came to the conclusion that, while God does exist, He does not reveal Himself or break the Laws He created. Rather, he has endowed us with Reason to guide our lives, and whether or not we believe He exists is not one of His concerns.

Philosophically, Axel was an Idealist, though also a Platonist and Dualist to an extent. He believed that time is best understood a progression of logically linked concepts, each premise giving way to a conclusion, which becomes the next premise. Such a scenario seemed to him to avoid many problems associated with a strictly materialistic view, such as the inability of "now" to be defined—how long is "now"? If "now" is merely a concept, this problem, in Axel's mind, should not arise, and yet our scientific/physical understanding of time is still able to be preserved. As a Platonist and Dualist, Axel argued that all perfect Forms (as Plato called them) exist in a transcendental reality we might, just as Plato did, called the "World of Forms." Such universals project themselves into our world imperfectly due to the inability of matter to arrange itself into any perfect form (such as a triangle, which we may think of in a perfect Form in our heads with exact mathematic specifications, although no truly perfect triangle can exist; it can only be represented by an arrangement of matter).

Drew Christopher Starnes was born on March 31, 1994 to his parents, William and Jennifer. Growing up, his dad was hardly around (due mostly to a divorce when Axel was four years old), and he grew quite attached to his Grandfather, which he still is to this day. In Springfield, Missouri, Drew was raised with a fairly quiet and standard life, though excelling academically and falling short socially. In his teenage years, he grew an interest in all things political, which led to his involvement in micronationalism at the age of 16. At this time, Drew took the name Erasmas Underwood—Erasmas being the main character in Neil Stephenson's Anathem, and Underwood being the last name he grew up with (his mother's maiden name). This was not entirely a pseudonym, as Drew had taken to being called Erasmas, and his use of the family name "Underwood" was so great that it was, as far as every school he had attended knew, his real name.

As Erasmas Underwood entered the micronational scene, he founded Underwoodia, a projection of his ideals and hopes for a future nation. While entirely administrated by Erasmas himself, a few friends did pitch in some effort. Underwoodia did become an outspoken proponent of Libertarian Conservative ideals in the community for a short time, gaining allies and staying involved. The first of these allies was Theodia, a friendship that became so great that, in late 2011 (almost a year after Underwoodia's founding), Erasmas decided to merge into the nation as a region called Mentia.

Mentia existed as an entirely online community (a social network, perhaps) for Theodian citizens who didn't live near actual Theodian territory. This idea sparked an activity surge in Theodia, bringing many new people onto the scene to join the network. However, after only a short time, Mentia collapsed due to issues in Underwood's home life. What followed was a lengthy period of inactivity in Theodia, during which, Underwood joined Utopia (a union between Lurk, Pashema and Monovia) at their request. Despite numerous attempts to unify the group and move the country beyond their petty differences, a few members simply refused to get along, and that project ended as well. At this time, Erasmas decided to take on the name Axel Nielson as a symbolic rebirth of character. Nielson was his family's name when they came to America from Sweden three generations ago, while Axel is little more than a meaningful name chosen for aesthetic reasons.

In June 2012, Theodian citizens found a renewed interest in the nation, and work slowly began to resume by the end of July. Axel became the acting Minister of Foreign Affairs and began work immediately to forge a better, brighter tomorrow.

On September 19, 2012, Drew Christopher Underwood took his own life.[5] The news hit the internet on the 23rd, and the microsphere (via Theodia) at around midnight on the 28th.