Westavia is a Micronations in Southern California. Following the dissolution of Westavia following the Orange-Ridge War and the Wars of Jehin Succession, the King created Vestenburg, Westavian Empire is the successor to the Westavian Kingdom now led by the ex-crown prince Shahn II, the Vestenburg Kingdom also known as Westavia has a population of 8 and a stable economy. In 2019 June, a rebel movement led by Duke Jay I took de facto control over Rattlesnake Point, this formed the roots of the Kingdom of Vestenburg which was under control of Westavia, After the Westavian civil war, Vestenbourg took the chance to gain independence, the Kingdom was successful , considering they had control over the Westavian wood supply, which meant they could impose tax on imports, they also attracted the envy of the Westavian king, who launched 3 failed invasions of Vestenburg. But once Vestenbourg was crushed in the 4th try, the Duke surrendered. Shahan. became ruler of Vestenburg and Westavia in 2021.

Rattlesnake Ridge is the first province of Westavia, the Vestenbourgish Independence movement began here. New Irvine Irvine is the grand capital of the kingdom and was the capital of the 3 nations before it.

Main Article: Westavian Land Force
The Vestenburg Army, known also as the Westarmy is commanded directly by the king and is made up of militia and citizen volunteers, There is currently no air force or Naval force. The army, at its height consisted of 4 soldiers, all of them active duty, this was during the Siege of New Irvine, also the Skirmish of Rattlesnake Ridge 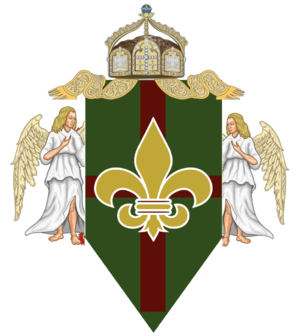 The Vestenburg Coat of Arms

There are currently 4 members of the royal house.

The Flag is a lot like the English flag, it is a green background representing the northern Pine Provinces and a Red Cross representing the souther Orange-Peak, Rattlesnake-Ridge and other provinces

Most Westavians are Asians, and they commonly celebrate Persian and Hindu festivals, the empire's citizens usually play Video Games such as ROBLOX, the Empire's citizens eat rice, and other Asian foods, but will sometimes eat American foods as well. The Westavian Empire became a Secular State oon January 21, 2019.