The United Socialist Republics, formerly (and informally) known as Almendria, is a nation primarily located in the South Cone of the Americas. It was created in 2016 as a monarchy with only one citizen.

Whilst initially conceptualised as early as 2014, Almendria was officially founded a the Kingdom of Almendria in 2016. The Kingdom was known to have had a Ministerial Council, and claimed to have had a functioning military[1]. Despite this, the early days of Tizian's state are obscured, with officials from the time either unable or unwilling to report on much of it[2]. 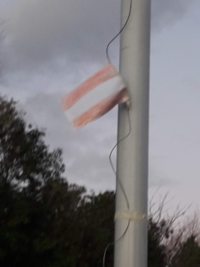 In late June 2020, the General Presidency made a public declaration addressed 'the misinformed mass of micronations hating on us'. The declaration touched on the controversy surrounding their 'expansionist agenda', and reassured diplomats that their methods were peaceful and voluntary[3].

During mid-2020, Almendria was involved in a crisis that involved them asking micronations to voluntarily unite with them as an Autonomous Republic[citation needed], which would result in the Federal Republic of Azeria suing Almendria for breach of sovereignty.[2].

In addition, the Tough Organization of Elite Stuff had declared military intervention after several members of the group were banned from Almendria's Discord server, due to then-General President Tizian A. assuming that an attack was imminent.[4] This would begin the TOES-Almendria War, a conflict that lasted for 2 weeks and 1 day and resulted in the eventual nuking of the Almendrian server.[citation needed]

Following the conclusion of the war, the server was briefly occupied by Valdieuria[5], forming the incredibly short lived Province of Almendria. Following civil infighting by pro-democracy of the Almendrian Liberation Front and New Almendria, the Province was transferred to the Knights Templar, who disestablished the province after a mere three hours, and and made it a self-filed union.

Following the end of the Almendrian War, the Templar ceded the territory once more to K-Su, self-declared Queen of Almendria[6], shortly prior to the treaty concluding the war.

Tizian Aruna was charged with conspiracy and abuse of power. Following a trial within the Almendrian Courts, Tizian accepted a plea deal from the prosecution, resulting in the General President becoming suspended from infrastructure usage for 36 hours, and removed from the National Council. It was in this period that Almendria renamed itself to the United Socialist Republics, though this name would not last long.

Tizian Aruna would eventually return several times, the first time expanding under the ARs until the Nexan Republic intervened. This would start a near two-year rivalry between Almendria and the Nexus, and the two would have conflicts, often ending in Almendria becoming inactive or Tizian being overthrown only to return again later to terrorize the community.

On December 22nd, 2021, INTERPOL and the Zepranan Government was contacted and Roland Lionheart overthrew Tizian, establishing the New Almendrian Empire, a new Almendria dedicated to peace and restoring the reputation of Almendria after the end of Tizian's tyranny. It is uncertain whether Tizian will be arrested, or if peace will last.

The union is composed of autonomous republics, states cooperating with each other to make up the USR.

The Government of Almendria collected donations, of which 90% is passed on to organisations dedicated to saving the planet from the effects of climate change[7].

On 13 August 2020, the Office of Economic Intelligence began the A-Pop Initiative, where Almendrians were given the opportunity to perform songs and earn a passive income following publication[10]. According to a later statement by Neil Josten, songs released under the Initiative gained a total of 100k streams[citation needed].

Later on the 1st of September, the Collective Farming Program was announced, where Almendrian citizens began growing vegetables to sell as produce[11].

Almendria currently has a Patreon page which is making over 30$ a month, and a working Crypto Mining Program. Almendria also owns AlmChat, a discord clone which markets itself as a Discord with free speech.