The Transantarctic Supramicronational Alliance (TSA) is an intermicronational alliance between several Antarctic micronations. The organization implements the Transantarctic Supramicronational Alliance Treaty that had its first ratifications signed and exchanged on 11 March 2020. TSA constitutes a system of collective defense whereby its independent member states agree to mutual defense in response to an attack by any external party. The participant micronations have common policies on product regulation, freedom of movement of goods, a common external trade policy and a common passport standard.

The TSA was officially established on March 11, 2020 as an alliance of several micronations with claims on the Antarctic continent. The beginning of 2020 manifested itself with a need for a micronational organization which would: 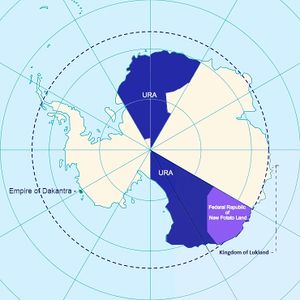 Minimum requirements for becoming a new member of the Transantarctic Supramicronational Alliance:

“The Parties to this Treaty reaffirm their desire to live in peace with all peoples and all governments. They are determined to safeguard the freedom, common heritage and civilization of their peoples, founded on the principles of democracy, individual liberty and the rule of law. They seek to promote stability and well-being in the Antarctic area. They are resolved to unite their efforts for collective defense and for the preservation of peace and security.”

The treaty consists of 13 articles.