Thomas I, Prince of Larsonia

Prince Thomas I (born July 21, 2005, Thomas Richard Larson Jr.) is an American micronationalist who holds positions in the Federal Empire of Aarbaro, Imvrassia, and Nedland. He is also a major figure in the Oaks Sector, known for leading the Republic of Larsonia, Commonwealth of Verticus, and the State of Larsonia.

Thomas Richard Larson Jr. was born on July 21, 2005 in Mesa, Arizona. He spent most of his early life in Phoenix, Arizona until he moved to Thousand Oaks, California in 2008.

Thomas Larson founded the Republic of Larsonia on January 29, 2017 whose first election took place on February 4, 2017. Thomas Larson's Thomas Party was victorious over Matthew Larson's Matthew Party, gaining every avaliable position (except for Vice President which went to Samuel Larson).

On March 12, 2017, former members of the Matthew Party (including Matthew Larson) rebelled against Larsonia and formed the Republic of Orange. Orange's rebellion prompted the Orange-Larsonia War.

The Orange-Larsonia War faced much criticism and controversy from many members of the community, including the then Prime Minister Edwin Farrar of URFD who become a notable critic of the war. The war ended on March 22, 2017, when the First Kingdom of Orange surrendered to the Republic of Larsonia.

The flag of the Republic of Larsonia, designed on January 29th, 2017 by Thomas Larson. Later used by the State of Larsonia.

Dissolution of the Republic and Verticus

The Republic of Larsonia later flourished in later months. It became a major critic of the communist regime in Breckland during its cold war with Lundenwic while becoming a major figure on the diplomatic stage, establishing relations with Imvrassia, the Aerican Empire, and the Greater National Socialist Republic (GNSR).

However, the political stage of Larsonia began to decline. The former members of the Orange government created the Orange Party and appointed Matthew Larson as the leader. The Love-Peace Party was founded by Stacey Larson and (at its height) consisted only of two members. Another party, the Democratic Party, was later discovered to be a fraud after claims of a red fox in Wisconsin being it's candidate in the 2017 Larsonian Emergency Vice Presidential Election.

The flag of Italy, a flag which became prominent in the State of Larsonia after the establishment of the Italian-Larsonian Committee due to cultural projects ordered by the first Larsonian Prime Minister.

After the end of the 2017 Emergency Vice Presidential Election, Larsonia's political stage continued to decline significantly, leading Thomas Larson to become disenchanted with being involved in the Larsonian Republic. He was able to gain some Larsonian citizens through the creation of an alliance with the Republic of Skill, but their involvement in Larsonia as a whole was extremely limited.

On June 17, 2017, the Republic of Larsonia was dissolved by Thomas Larson after many months of political decline and infighting. Larsonia's former territories were later grouped together to form the Commonwealth of Verticus. Verticus barely lasted two weeks until joining the Federal Empire of Aarbaro as the State of Larsonia.

On June 24, 2017, Thomas Larson ceded all Verticusian territories to the Federal Empire of Aarbaro which became known as the Principality of Larsonia.

Positions in the Federal Empire of Aarbaro 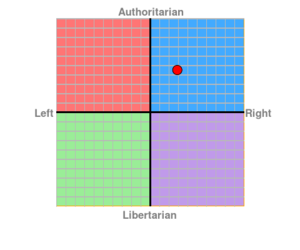 Thomas Larson usually describes himself as a moderate right-wing libertarian and is an avid supporter of capitalism. He is a self-proclaimed enemy of both communism and fascism, describing them as "more or less the same".

Larson has also significantly shown support the Republican Party and much of its ideas.

Thomas Larson believes himself to be a devout Christian and wishes for Judeo-Christian ethics to have a significant place in Aarbaro.

Larson is also very much a critic of the Islamic militant group, ISIS.