The Reform Act of Aenopia, colloquially known as The Reform Act or, in exceptional cases Y Ddeddf Diwygio, was a document consisting of 27 articles.[a] The document covered subjects such as national symbols, governance and foreign relations. The Reform Act was published on 1 February 2020 by Simon Reeve, initially with a deadline to complete all articles of 1 July 2020, 15 August 2020, and 1 September 2020 respectively.[1]

During its existence, The Reform Act influenced Aenopian culture, governance, and economy. Other requirements included in the document included the dissolution of the monarchy of Aenopia in favour of a constitutional monarchy and Y Senedd.

Article III of The Reform Act enacted the replacement of the national anthem, formerly Buck's Boogie by Blue Öyster Cult with Jupiter by Gustav Holst. 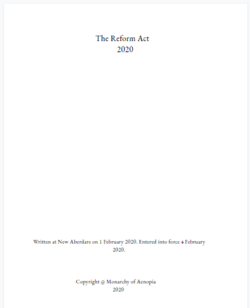 The cover of The Reform Act. The document utilises a similar template to other Aenopian documents.

Following criticism from certain micronationalists referring to Aenopia as 'highly simulationist' due to its history, The Reform Act was published on 1 February 2020 by Simon Reeve. Made up of a document consisting of 26 articles with the main objective being to improve factors of Aenopia including its governance, national symbols, foreign affairs, etc. The contents of the document ranged from updating the national symbols to the formation of an Aenopian Government and a legal system. On 2 February 2020, the first 3 requirements out of the 26 in the document were fulfilled; this saw the replacement of the national anthem and state flag and the creation of a coat of arms.[2]

On 27 July 2020, Article XI was enacted as part of the Nationalisation of Aenopian Companies Act.[3][4] The Act was largely influenced by Article XI which decreed the nationalisation of all companies in Aenopia, with at least 25% of the profits going to the Aenopian Government. This excluded state services such as the Aenopian Postal Service which remain under full state control. This document also included the dissolution of numerous inactive companies such as Aenopia High-Speed Ltd. Article VII which decrees the creation of a governing body consisting of MPs to represent each territory and department was fulfilled with the first Y Senedd meeting on 16 August 2020 with a total of seven Members of Y Senedd (MoYS). On the same day, the newly formed Y Senedd voted to enact Article XXVII of the document.[5] This article was the only part of the document which was not mandatory.

The Reform Act was created in a Google Docs document featuring 10 pages. The Reform Act consists of 27 articles split into 2 sections and a total of 1,536 words and 11,813 characters.

Article I authorised the revoking of all political positions previously held before the publishing of The Reform Act except the monarchy itself, focusing particularly on the symbolic title of 'Warmaster'. Articles II, III and VII were intended as a revamp of the national symbols of Aenopia, including the replacement of the flag (Article VII) and national anthem (Article III), whilst a new coat of arms was introduced, featuring a puffin and billberry - the national animal and plant respectively. Section II of The Reform Act focused heavily on the dissolution of the absolute monarchy and the formation of a constitutional monarchy, with five articles (Articles IV, V, VI, VIII and IX) focusing on said dissolution. Despite this, however, Articles IV, V and VI were never fulfilled by the time Article XXVII was enacted on 16 August 2020.

Articles X, XI and XII focused on a partial reshuffle of Aenopian companies including nationalisation and dissolution of inactive companies. These articles later became the focus of the Nationalisation of Aenopian Companies Act on 27 July 2020.

Section II focuses primarily on Aenopian politics, suggesting such changes as introducing an Member of Parliament to every Aenopian territory (later named Member of Senedd or MS) and forming a supreme court and associated legal system to accompany it to name a few.

Article XXV and XXVI decreed that the document was to have been exercised to a suitable degree within 148 days of its publishing, with an extension of 46 days being available if deemed necessary due to the partial or complete lack of activity within the document, resulting in 194 days to complete the document. The latter article also stated that if the contents of the document were not fulfilled within the time given, an investigation utilising the Aenopian Law system (See Articles XXIII and XXIV) was to have been opened into the lack of responsibilities in power. If during an extraordinary case where Articles XXIII and/or XXIV hadn't been fulfilled, the individual(s) in charge would have received prosecution. 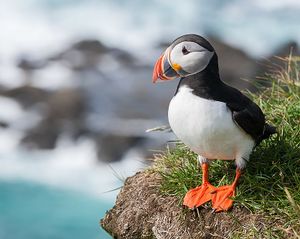 The national animal of Aenopia; the Atlantic Puffin introduced as part of The Reform Act.

The most notable and earliest changes enacted by The Reform Act included the change of national symbols on 2 February 2020 through Articles II, III and VIII. This included replacing the flag and national anthem and implementing a new coat of arms. Another important change influenced by The Reform Act included the creation of a democratic parliamentary system[b] allowing legitimately elected Aenopian citizens to influence Aenopian politics; a change from the previous 'egostan' monarchy.

Other documents influenced partially or completely by The Reform Act include the Nationalisation of Aenopian Companies Act, which resulted in profits from companies going directly to the Government before being redistributed, instead of profits solely benefiting companies. This also closed up any possibilities of tax evasion. Diplomatic relations with other nations have also been affected by The Reform Act, with aspiring allies requiring to follow a strict set of requirements.[6]