From MicroWiki, the micronational encyclopædia
(Redirected from The Kingdom of Memeistry)
Jump to navigation Jump to search

The Kingdom of De Witt or more commonly known as De Witt is a Kingdom established in the Royal Capital of Memeistrum, Founded on May 1st, 2020. De Witt and it's citizens believe in free use of Internet, Freedom of Religion online, more respect to Memers as people, removal of internet censorship, and free trade of all e commerce and knowledge across the internet. Most Citizens of De Witt follow the Christian Meme Account "The Memeistry."

The Kingdom of De Witt is named after its founding father King Nathaniel De Witt as a little project. The name De Witt derives form the words "The White" in Dutch.

The Memeistry Instagram page began on December 30th 2018 named the "Student Memeistry" created by Nathaniel De Witt, the page for a long time in the beginning was private and Nathaniel only allowed people form his church to follow it until August 2019 when Nathaniel changed the Account to the "Bellevue Memeistry" in honor of his Church, by December 30th 2019 a year after its founding the account had around 700 followers. On December 31st 2019 the account was finally renamed to "The Memeistry" after the church got suspicious of the account looking to tarnish their name, Nathaniel had looked to create a "Meme Empire" of sorts controlling multiple meme accounts and YouTube Channels but this dream never came to fruition. On July 29th of 2020 King Nathaniel returned to his Kingly duties over the Kingdom after preparing himself more properly this time. During his return he renamed the Kingdom from Kingdom of Memeistry to the Kingdom of De Witt.

De Witt consist of a Absolute Monarchy along with a Regency who leads along side the King or Queen (similar to the US Vice President) and a Peoples Council consisting of 3 representatives for each territory and Social Media account. The King usually makes most decisions with or without consent of the Regent or Peoples Council, but if the King wishes he may delegate the passing of Laws, Bills, or Treaties to the Regent or the Council. Most Territories or Accounts have a Governor who passes local bills or laws for the Territories and Accounts, most laws can be override by either National laws or the Peoples Council.

National Ministries are referred to as Memeistries in honor of the King and his Account.

King Nathaniel is a former 4chan CNN war veteran and a retired 4Chan user, as such Nathaniel has made sure the Memeistry on Social Media is impenitrable to online attacks and harassment, thus he has created a Online Army called the Meme Knights, a group of online Memers and Followers who has learned how to use 4chan tactics to invade, conquer, and destroy internet targets. There is a total of 15 Meme Knights with General "Sir Meme" one of Nathaniel's close friends and fellow memer, Nathaniel has developed the "Memeistry Memetic Doctrine" a guideline of Internet Warfare and code of conduct for the Meme Knights.

The IMC is Nathaniel's intellegence agency and functions along side the Meme Knights to work on operations involving finding account owners, detecting threats online, and ensuring The Memeistry is uncontested in Nathaniel's sphere. The IMC is headed by Director "Regent Meme" another close friend of Nathaniel's and the Regent of the Memeistry, there are a total of 4 spies working for the IMC.

The Culture of De Witt is a very internet based culture along with a very Christian one, many De Wittians recognize Sunday as a Holy Day and perfer not to work during then. De Wittians are very active on the Internet and as such is why the Kingdoms claim to Internet territories are much larger than real land claims.

Sundays are also recognized as Holidays as well and require companies in the Kingdom to close in observance of these Holidays.

The Kingdom being located inside the Southern US draws much of it's Cuisine from the South, along with this King Nathaniel's Japanese heritage makes Sushi the National dish, Sushi making is a widely regarded skill in the Kingdom. Common dishes may include:

While Football is the National sport no De Wittians currently plays it. De Witt has multiple Basketball and Baseball players but not enough to form a League for the nation. De Wittians commonly watch NCAA Football and the NFL along with MLB, NBA, and other NCAA sports. The King is known to be a big fan of Motorsports.

Teams cheered for by Memeisters

De Witt has an online Store for Meme account Merchendise, King Nathaniel has considered Expansion of the Shop to include Citizen Documents, Passports, Currency, Flags, and other National Items. The Shop is currently closed due to Covid-19 and the Kingdoms funds running dry, The King plans on reviving the Shop once the pandemic passes over.

De Witt plans on expanding to include a Filming Industry along with On Demand Printing for Shirts. Future Goals of Sponsorship on the Memeistry, and Supporter based services have been purposed. 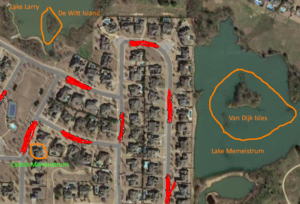 City of Memeistrum, consist of De Witt Island, Van Dijk Isles and Castle Memeistrum. the total area is 59903 Sq Ft. The City has a Population of 1

De Witt ranked through all Ranking systems used in the Micronational Community.