Tazsandia is a federation of Temporary Autonomous Zone sandbanks (TAZs) characterised by their brief emergence at low tide.

Tazsandia was established on April 8, 2015 as a federation of two territories, the Goodwin Sands in the English Channel and the Ballina North Creek banks on the coast of New South Wales, Australia.

Tazsandia’s constitution acknowledges the environmental value of sandbanks in both their exposed and submerged conditions and their cultural heritage value to human populations.

Tazsandia’s administrative steering committee supports the establishment of a Marine Conservation Zone for the Goodwin Sands region[1] and opposes the construction of an airport on the sands.[2] Tazsandia also supports the environmental protection of the Richmond River Estuary at Ballina.[3]

Tazsandia recognises prior indigenous rights over any of its federal territories as sacrosanct and as having priority over any representations or uses of the sandbanks proposed by the Federation.

Tazsandia supports the continuation of social cricket on the Goodwin Sands, a tradition started in 1824 by Ramsgate Harbourmaster Captain K. Martin, which has continued intermittently to the present. A video item on a recent, and somewhat inundated match, played in 2012, can be viewed on YouTube. The practice was commenced in Ballina in 2015 (documentation in progress). 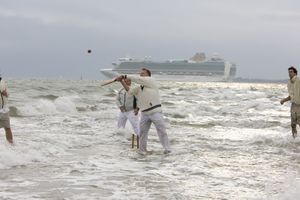 A cricket match on the Goodwin Sands 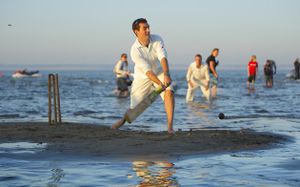 A cricket match on the Goodwin Sands at low tide

Tazsandia welcomes proposals from artists for projects that can record and/or reflect upon aspects of Tazsandia. An artist-in-residency scheme is currently being developed and expressions of interest are welcome.

New sandbank territories are eligible to apply for inclusion in the Taszandia federation and will be considered on provision of a) a statement of similar constitutional values to those outlined above; and b) documentary evidence of cricket being played on the sand bank in question.

Applications will not be considered from sandbanks which are the subject of native title and/or related disputes or that have active use by communities other than those proposing inclusion in the federation.

Tazsandia also welcomes the establishment of diplomatic relationships with other micronations sharing its principals. Representatives may contact the Chief Administrator via e-mail at phayward2010@gmail.com or through Tazsandia's Facebook page.