From MicroWiki, the free micronational encyclopædia
(Redirected from TOES Wiki)
Jump to navigation Jump to search

TOES (an acronym for Tough Organisation of Elite Stuff; Tigrinya: ተሪር ውድብ ብሉጻት ነገራት‎, romanized: tärirə wədəbə bəlus'atə nägäratə) is a satirical, invitation-only micronational social club and organisation which is hosted on Discord. The club jocularly claims to be "more prestigious than the amateur Micropolitan Club and Lounge." It was initially formed on Christmas Day 2019 as a group chat between micronationalists Leon Montan, Zed, and Leah Cohen, under the name "The Trio" or "The Trio™️".[1] Since then, TOES has become infamous throughout MicroWiki@Discord and the Reddit Sector, as well as several smaller servers, particularly attracting more controversy following the TOES-Almendria War in June 2020.

As an organisation, TOES functions with Montan has the de facto owner, with members (called "TOESites") voting on changes to the organisation, who to invite and who to ban. Members may also be kicked from TOES. TOES follows an informal "do not ask to join" policy, where, if one asks to become a member, they will be banned, though more recently this has not always been the case. TOES has a member cap of ten, which is the current membership count; there are eleven former members. By May 2020, most members of TOES were either former members of the erstwhile Organisation of Active Micronations (New Eiffel Union) or the later North Atlantic Defense Union, leading to the creation of the TOES Sector on 21 May 2020 to describe the sector.[a]

TOES is a divisive part of the MicroWiki community, being lauded by some, and criticised by others. TOES was most influential during early and mid-2020, being a primary influence in the MicroWiki@Discord Administrative Protests of 2020 held between 16 February—March 2020, which saw over 30 participants;[2] however, TOES has since began to attract controversy since the TOES-Almendria War in June 2020, and in the following months has become less influential over MicroWiki@Discord, though it remains active elsewhere. 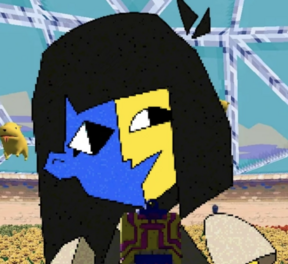 Former Discord icon of Leah Cohen, one of the founders of TOES.

Zabëlle Skye, Leon Montan, and Leah Cohen were the only three users talking in various channels on MicroWiki@Discord on Christmas Day, around 1–3 am UTC. Smith proposed the idea for them to create a secret(ish) group DM on Discord. Montan and Cohen were both fond of the idea, and Montan officially created the group DM which was later dubbed "The Trio™️". The Trio consisted of mostly "shitposting", however after a few days turned into a hub of conspiracy and discussion of various memes and micronational news. 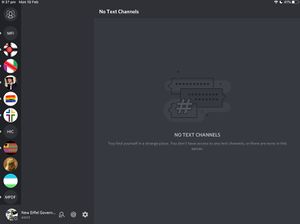 A screenshot of the TOES Discord server after its deletion

Since 2020, seven members have been admitted into TOES, and eleven have been banned on multiple grounds after the ban list was officially added after the adoption of the charter. TOES also gained a status and reputation of being a high-class and elite social club. Cole B. joined on 15 January, and was the first member to have joined who was not one of the founders. On 20 January, an official Discord server[3] was created to have multiple channels. The server ended up being deleted on 10 February after it had been mostly un-used for over a week. Marvel became a member on 20 January but was kicked from having membership on 1 February; making them the first member to have been kicked from TOES. Simon Reeve became the fifth member on 2 February. On 7 February, Smith proposed the current charter, which was passed 3-0 and officially adopted on 8 February, which officially renamed the group to the Tough Organisation of Elite Stuff ("TOES"). Jayden Lycon became the sixth member on 11 February. On 14 February, the official motto was adopted "I didn't choose to be in the TOES, the TOES chose me" as proposed by Lycon. Max Baez was made a member on the 14 February, and William Efton was also made a member on 16 February. Brian withdrew from the organisation on 24 March 2020. On April 18, Zabëlle Skye became Minister of MicroWiki Management.

TOES has a large ban list, which contains numerous individuals. It contains prominent micronationalists such as Dionisiy Tezdzhan-Smahin and Violette "Suzuki" Clingersmith.

TOES was a primary influence in the MicroWiki@Discord Administrative Protests of 2020 held between 16 February—March 2020.[4] The TOES Sector is a political sector informally created on 21 May 2020 which was created for members of nations ran by TOESites; whether or not a nation calls themselves a member of the sector or chooses to associate with it is completely optional. A documentary on TOES titled TOES: A Documentary on the Elite Organisation is currently in production.[5][6] TOES Wiki, which runs on the wiki farm Fandom (also known as Wikia) is an online encyclopædia dedicated to TOES.[7]

There are fourteen former members.

TOECON is an alert state, similar to DEFCON, used by TOES for issues relating to MicroWiki@Discord. It was developed by Simon Reeve on 17 February 2020.

The highest ever activated was 1 FOOT, and later comically upped to 4 FEET were activated. This was during the 'Dan Morris incident'.

During 16 - 19 February 2020, multiple levels of TOECON were activated because of the MicroWiki@Discord Administrative Protests of 2020, the highest being TOECON 4 after the 'The Microwiki Genocide', referring to the mass server warnings issued to key participants of the protest. TOECON 4 would later be reactivated on 29 September following Yaroslav Mar being unbanned from MicroWiki, along with Elizabeth Lewis and Zabëlle Skye resigning as administrators.

TOECON 2 was activated on 23 February 2020 after drama in the server involving the banning of open supporters of the terrorist organisation ISIS. It was activated again on 30 September 2020.

In an opinion piece for the Micronational Gazette, Isaiah David slammed TOES as "silly" and "simulationist", citing acts of server raiding during the TOES-Almendria War, which Burdette called a "disgrace to micronationalism".[10] This echoed an earlier press release by Tizian Aruna of the Communist Union of Almendria, which claimed their nation declared war on TOES following alleged acts of server raiding.[11]. Owner Leon Montan refuted these claims, stating that the war was a joke that went out of hand.[12] Montan has since accused Burdette, as he is known for his usage of Discord server raiding, which is known within the micronational community to be an extremely "simulationist" act. He has responded to this by saying he no longer does and his condemned his former actions.