Bascal (IPA: bɑːskɑːl, Malay: Baskal, Bascal Malay: Baska, Jawi script:بسکل), officially known as the State of Bascal, was a landlocked micronation located in Malaysia. It was established on 7 January 2009 by Amir Syafiq, his friends, and his families. The State of Bascal was an enclave surrounded by the state of Terengganu, Malaysia. The capital city of Bascal was Kamp Basca D.C and the largest city was Singapore Street. On 26 October 2011, it changed the name from "Land Republic of Bascal" to the "State of Bascal".

On 15 November 2014, the State of Bascal officially dissolved as an independent micronation and rejoined with the State of Terengganu, Malaysia after its 5 years in existence.

Bascal derives from the Malaysian word Basikal which means Bicycle. It is also a name of the predecessor of Bascal, "Kampong Basikal" which literally means a bicycle village.

The first inhabitants were the Malays that came throughout Malaya (mostly from Kelantan and Terengganu). Bascal was first settled in the late 1990s to early 2000s.

In the year 2005, a group of small kids named the place Kampong Basikal (English: Bicycle village) and it became an official name for the area. In 2006, it declares itself as an independent village. With a mayor and a citizen of it's own.

In 2008, Amir Syafiq called for a plan to create a sovereign state to replaced Kampong Basikal. On 7 January 2009, the declaration of independence from Malaysia was declared by Amir himself in front of the main village square (which is now called the Ikan Skila square), attended by his family members.

On 16 October 2014, Governor Amir Syafiq officially announced to dissolved the State of Bascal because He was no longer active in Micronational world and due to the pressures he had with his families, studies and school activities. Because of this He had no time in taking care of Bascal and their administration. Lack of successor also caused the dissolution of Bascal, being almost 3 years as a Governor and no one interested in being a successor. The idea of separatism in Syafiq's minds are also fading, and becoming more more acceptable on being a Malaysian than his previous rebellious years. The dissolution process was not delayed and continued his last days until 15 November 2014, Amir Syafiq and the Ketua Negara officially retired and because of this, caused the dissolution of Bascal itself.

Suddenly in 2018 it was revived by a group of anonymous users, intent on conquering many micronations, and declared war on the Repubblica di Mangolia to re-baptize its territory.

Bascal was a unitary parliamentary constitutional republic. The Ketua Negara is the Head of state of the country. Ketua Negara in Malay means "Head of State" who acts like a President (Like those in India and Singapore), they also act as a Head of the religion and the citizens of Bascal (Like the Yang-DiPertuan Agong of Malaysia and the Queen of England). The Head of the government was the Governor and are no different than a prime minister, only with different name. Bascal once has 3 main political parties such as Bascal Democratic Party, Bascal Republican Party (also known as the Freedom Party of Bascal), Islamic Party of Bascal and also independent. Each political party has one seat at the parliament (due to lack of seats, size and population). In 2012, IBP and BRP dissolved and left Bascal Democratic Party as a sole party along with an independent candidate.

The national constitution (Malay:Perlembagaan Kebangsaan) is the official constitution of Bascal. It was also known as the "Yellow paper" because it was covered by a yellow paper. It is one of the shortest constitution in the micronational world and in the world itself. The constitution has been changed for 3 times for the past 4 years.

Bascal was divided into two similarly sized regions that was Mainland Bascal and the Autonomous territory of Gong Badak. Due to it's small size, most of Bascal's lands are urbanised or under urbanisation with an exception of Padang Hijau and Hutan Sembelih. Bascal's geography differed from which regions they at, for example on the northern parts of Bascal like Hutan Sembelih and Limpah Budu, Padang Hijau is heavily forested, while in central to southern parts of Bascal like in central and southern Padang Hijau, Kamp Basca D.C, Longkang and Bukit Guling was mainly green plains and has less trees. In the Autonomous territory of Gong Badak, most of the area was mostly desertous and are mainly covered with sands with few grasses and trees, mostly in southern part.

Most parts of Bascal was run by concrete drainage systems with few exceptions in Kamp Basca where there is one river that flows from Jalan Hijau through Taman area called Sunga Ungu (Purple river in Terengganuan), it is also the name where Sunga Ungu area based from. In Bukit Guling, there were once an ephemeral lake called "Tasek Kering", which in 2013 was flattened out by a new road pavement. There is one river in Gong Badak that is called "Sungai Angsa" and was the longest river in Bascal. The river divides Jambu and Padang Angsa region.

Bascal was once a forested area. Due to urbanisation, most areas of Bascal has turned into a one urban area that took more than 60% of the country's area. Bascal once has one National park that is Hutan Simpanan Negara which located at the northernmost part of Bascal in the district of Hutan Sembelih between Bascal-Malaysia border.

Bascal's native fauna mainly consists of insects and few reptilian species. The most widely distributed species are lizards and ants, which can be found throughout Mainland Bascal and Gong Badak. Various species of snakes can be found on northern parts of Bascal at Hutan Sembelih, Jalan Rumput, Pagar Karat and Limpah Budu, Padang Hijau. Few species of spiders, grasshoppers and centipedes can be found at Ayer, Padang Hijau and Pagar Karat. Snails and frogs were once common in Kamp Basca, now extinct due to urbanisation. Rats are the only non-human mammal species in Bascal, which considered functionally extinct since 2013. In Gong Badak, goose were commonly found at Jambu and Padang Angsa region. Gong Badak's goose was the only bird native to Bascal and was once the largest animal of Bascal, now have since died out due to low fertility rate and old age.

Bascal was generally hot and humid throughout the year, the average temperature was around 28 - 34 °C, the highest would be 30 - 35 °C mostly between July or August and the lowest is around 22 - 25 °C mostly from November till early January. Bascal receives an average rainfall around 2600 mm. The climate in Bascal was same as Kuala Terengganu, Malaysia.

Bascal during it's existence was divided into 8 districts and 22 areas and had 1 autonomous territory. Most of the districts was governed by President and the Governor of Bascal, due to because of lack of population in the country. Only Singapore Street and Baround Ayers has it's own Governor. Singapore Street was the only autonomous district in mainland Bascal, independently controls it's own education system and laws. Bascal also has one territory that was the Autonomous Territory of Gong Badak which was separated from districts of Bascal. 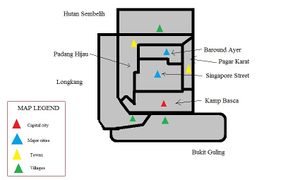 There are a total of 22 areas as of 2014, compared to 21 in 2013. Areas are a sub-division of Districts. Bando Lame area is separated from Taman area on 31 July 2014, and became the 4th area of Kamp Basca and 22nd area of Bascal. If Gong Badak's regions were included, there will be a total of 27 areas. Words that were written in Bold was the district capital which can be seen below. Gong Badak was divided into Regions, which also shown below

~Areas of Bascal by districts

Bascal abolished it's military in 2010 and replaced with Bascal Police Force as it's main defense force. BPF had 3 personnel and the current General was Amir Syafiq. It's headquarters was located besides the Parliament in Kamp Basca D.C. BPF had a very small active personnel but well equipped with weapons and vehicles.

Bascal had a population of 9 (2012 est). Bascal was ethnically homogeneous, the Malays made up the majority of the country. Most of Bascalians are concentrated in large cities like Singapore Street, Bandar Muhammad and Baround Ayers.

-Ethnic groups : Malays, some have Chinese and Thai descent.

100% of the population belonged to Shafi'i branch of Sunni Islam. With few influences from Sufism.

Bascal Malay and Malay are the two official languages of Bascal. Majority of Bascalians speak Bascal Malay which was the standard variety of Terengganuan language. Other languages include Kelantanese, English, Gutaish (Endangered) and Arabic. All of them are recognised as "regional language". Both Jawi and Latin are co-official in Bascal.

Education in Bascal was overseen by two Ministers. The Minister of Education was responsible for schooling in the country while Curriculum Minister was responsible for curriculum activities such as Sports, camping and more others. Primary education in Bascal is same as those of Malaysia. It begins at the age of 7 till the age of 12 while Secondary education starts at 13 till 17 or 18 (5 or 6 years). Bascal also has one and only University which was the University of Bascal located at Singapore Street A.D. Although a University, the UoB still has no post graduates or even students.

Due to it's location, the culture of Bascal was heavily based that of Malaysian culture. Other cultures such as Korean, Japanese, Indonesian, British, Indian, Chinese and American also exist. Malay, Indian and Arabic culture played a major role, because Bascalians belong to ethnic Malays and all of them were Sunni Muslims. All national holidays of Bascal are same as those of Malaysia (especially Terengganu) except for Bascal Independence day and State Day.

*Bold are the national days only in Bascal.

Bascal use three types of media that was the Internet, the newspaper and radio. Bascal regulated three newspapers, one in English, Malay and Bascal Malay. Once it operated two radio stations, now dissolved because of financial problems.

In Bascal. The most well known sports activities are Cycling. Majority of Bascalians can cycle and is the weekly routine for some Bascalians. It is considered to be the national sport along with association football and badminton. Association football and badminton however, remains strong mostly among males. Bascal had it's own national sports committee and also a member of one Malaysian sports club. Bascal National football was founded in 2009 and currently a member of Virtual Micronational Soccer Board along with other micronations.