The Sedro-Woolley Accords also known as the Sedro-Woolley Agreement, is a treaty that Emperor Anthony I and "Xander Renkema" signed on 17 August 2019. This treaty was made as a response to the offer by "Renkema", which would later become proven to be a hoax. 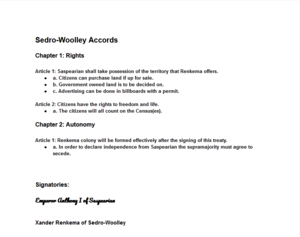 Article 1: Saspearian shall take possession of the territory that Xander Renkema offers.

Article 2: Citizens have the rights to freedom and life.

Article 1: Renkema colony will be formed effectively after the signing of this treaty.