Secundomian Dependent Territory of the Sandbars

The Sandbars (officially The Secundomian Dependent Territory of the Sandbars) was a micronation founded on December 2, 2010, and collapsed on March 31, 2011.

The Sandbars was originally going to consist of sandbars in the Myakka River, near North Port, Florida, USA, because President Marra was planning on moving to his father's house. After he decided not to move to his father's house, and after the President's stepfather (who currently possesses the First Family's kayaks) refused to give full possesion of the kayaks to President Marra, he relocated The Sandbars Project to southern Boca Ciega Bay (located mostly in between the cities of Gulfport and St.pete Beach, Florida), where sandbars are in abundance.

The independence of the Sandbars was officially proclaimed on December 2, 2010. It supposedly had the legal grounds to proclaim independence because there is no American Act of Government that actually regards the specific subject of what would happen if a new island appeared in American seaspace. Therefore, if a government (in this case the Sandbarese Government) established a seaspace around them and regulated what would happen in the event of a new island emerging within that seaspace, then sandbars and shoals, according to President Marra, have the ligitimate legal grounds to proclaim themselves at least a "self-proclaimed autonomous jurisdiction" of the United States. The President plans to mail Sarasota County (future location of the Sandbars' legal predecessor) on the matter soon.

President Marra is currently working on a new micronation, based at his father's house, which will be called "Arentalea" ("sandbar" in Latin). Arentalea will be a "highly eccentric, non-serious, and utterly stupid" monarchy, with Marra being Prime Minister (with all the real power), but his friend Mikel's cat, Sydney, being the King.

The name "the Sandbars" ("the" is not capitalized) is meant to be similar to other actual island nations, such as the Seychelles or the Bahamas.

The Sandbars was located entirely in Boca Ciega Bay and neighboring Tierra Verde Bay in west-central Florida, United States. It was mostly off the coast of the cities of St.Pete Beach, Gulfport, and Bay Pines, Florida, and claimed all sandbars and shoals in those bays. From Tierra Verde Bay (Tierra Verde Province), an observer can see the world-famous Sunshine Skyway bridge, which goes across Tampa Bay. 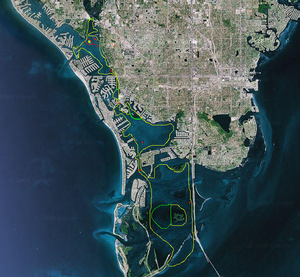 The Sandbars was a federation of five provinces. These are the provinces, in order from north to south:

The second-smallest province, Northern Province consisted of Oyster Islands National Park in the north, south to Shrimpy Island, the southernmost sandbar in the Conga Line Archipelago, a line of sandbars just south of Dog Leg Key, an American possession. The capital was Parker City, the only sandbar in the Archipelago with a mangrove tree on it.

Capital Province, the smallest province in the Sandbars, consisted solely of Bird Island, a mangrove island west of the Conga Line Archipelago in Northern Province. Bird Island contained the capital of the Sandbars, Mangrove City. It was the only province that did not have a National Park.

Enigma Province was the second-largest province and one of the most, if not the most, unusual province of the Sandbars. It consisted of Wondersland (the S is silent; this is meant to be a combination of "Wonderland" and "island"), a collection of three island flats (sandbars connected to an island) and a massive sandbar (Supermassive Island), the largest in the nation. Wondersland was located southwest of Mangrove City.

Enigma Province then extended down to Enigma Ground National Park, a bed of seagrass just north of The Isle of Plenty, which was in Middle Province. It was the only province with no mangrove trees. The capital was Noname, located on Crescent Island, a small, isolated, crescent-shaped sandbar south of the Conga Line Archipelago, which was in Northern Province.

The intermediate province in terms of both size and latitude, Middle Province started at The Isle of Plenty, a mangrove island south of Enigma Ground National Park, and extended down south until Donut Island, in the southwest corner of the province.

Middle Province contained Quaint Sound National Park, arguably the "most fabulous" National Park of any micronation. The capital was Gulfport Middle Ground, a flats (low, extremely wet sandbar) in the central part of the province.

For national symbols, see: Symbols of the Sandbars.

Sandbarese culture was much the same as American customs. It was considered polite (at least to former President Marra) to greet people by sticking two fingers in the air on one hand, in a "peace" gesture.

Former President Marra is a big fan of the British alternative rock band Coldplay, and the other Citizens enjoyed everything from pop to classical. Because the former President is such a big fan of Coldplay, the National Song (though not necissarily the National Anthem) was Clocks, and the Provincial Song of Capital Province was Yellow, both of which are Coldplay songs.

Sandbarese food is a mix of British and American styles, with British being the most influential, as Governor Butler of the southern Provinces ran a tea room in the nearby United States. This is also why ham quiche is the National Dish. The only real food that actually comes out of former Sandbarese territories is seafood, such as crab and tarpon.

All Sandbarese people were American-born, but none of them were Native American, ethnically. The main heritage was British, and every single citizen of the Sandbars had British heritage. Other, less predominant heritages were Italian and Polish.

The Sandbars' official language was English, and was the only language citizens spoke.

On January 10, 2011, the Sandbars officially adopted a unique word, "wumbo". It was adopted as a tribute to the cartoon series SpongeBob SquarePants for no practical reason whatsoever (in the words of President Marra, "It was adopted for purely comedic and non-serious reasons"), and the Sandbarese Government claimed that "wumbo" is now the only word in any language in the world with no meaning at all.

The Sandbars was a multiparty republic, lead by the President, Bubba Marra, an Independent. Presidential Elections were to be held every 2 years. A President could serve an unlimited amount of terms, unless he rigged an election or performed a number of acts deemed "unethical" by the Supreme Court. Secundomia had a limited amount of control over the Sandbars.

The Sandbars had a notoriously strict recognition policy when it came to other nations. It would not recognize nations that:

Exceptions could be made if the micronation has "litigated" grounds to claim said territory, if the story is believable enough to the Government.

*These do not include micronations. These are nations that the Sandbarese Government seriously believed to be independent nations.

**The Sandbars recognized Taiwan in the sense that it is not the 23rd Province of China, and did not recognize it's claims over all of mainland China or Mongolia.

***Vatican City is a recognized sovereign state, but it is not a member of the UN, which is why it is separate on the list.

Due to the Friends Alliance, after becoming friends with DES Senya, CR Dallingrad then asked for alliance with the Sandbars, and PR Pambia immediately added the Sandbars on its friends list.

*There may very well be many more nations that did not like the Sandbars, but these are nations that had engaged in unfriendly conversation with the President. Erephisia was formerly unfriendly, but then became an ally of the Sandbars. If a micronation failed to continue conversation of any kind with the President for an undesignated amount of time (as in Ultamiya), it was taken off of the list.

Reasons for relinquishing relations with a nation are listed in parentheses.

Nations that did not recognize the Sandbars

These are micronations that had openly stated they do not recognize the Sandbars, or claimed it in its entirety.

The Sandbars was in the sub-tropic climate zone, but because of its small size and relative similarity in climate throughout the micronation, it had a much more humid climate, but temperatures are about normal. In fact, the Sandbars was one of the wettest micronations on earth. At high tide, as much as 98% (if not more) of the Sandbars was underwater.

The Sandbars was not very diverse in its plant life. The only plants that grew in the Sandbars were mangrove trees (red mangrove trees, to be exact: the red mangrove was also the National Tree of the Sandbars) and a few varieties of sea grass (also called seaweed), which grew underwater. An as-of-yet unidentified species of tall grass thrives in a small patch of mud on what used to be Independence Shore, where it is not ovegrown with oysters.

The Sandbars was far more diverse in its animal life than plant life. Many varieties of fish thrived in the Sandbars, ranging from small bluegills to mullet to even tarpon. Other notable examples of animal life in the Sandbars were the National Animal, the bottle-nose dolphin, the National Bird, the Great white heron, stingrays, and even one shark sighting around Enigma Province. Non-fish and bird life in the Sandbars consisted mostly of crustaceans, such as crabs (mostly blue crabs and fiddler crabs, which could only be found in Quaint Sound National Park) and oysters, as well as reptiles such as sea turtles.