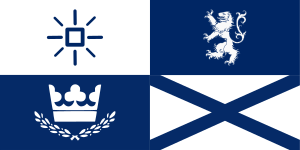 The Royal Standard of the Kingdom of Ikonia.

The Royal Standard of the Kingdom of Ikonia is the heraldic banner used by Abrams I of Ikonia in his capacity as King of Ikonia. Variations on the standard banner are used by other members of the Royal Family as their own personal arms.

Quarterly, the 1st Argent a sun carréed Azure, the 2nd, Azure, a lion rampant Argent, the 3rd Azure, a crown upon a wreath Argent, the 4th, Argent, a saltire Azure.

The Royal Standard - adopted on 1 December 2018 - is divided into four quadrants. The first and fourth quadrants represent the political party and the Floridian origin; the second quadrant represents the national animal, the wolf; the third quadrant is comprised of the flag of Ikonia, such like the Imperial Standard of Austenasia.

Prince(ss)es of the royal family receive their own banner when they are born, or if a consort is found to the throne. They get variants of the Royal Standard with cadency marks received from His Majesty's Heraldic Authority. Some standards, like the Duke of Nikodemia do not follow this rule and use the Duke's personal arms instead.