Gwladcoeden is a Semi-presidential constitutional republic. Its constitution is highly democratic and the party has a thriving multi-party democracy. The countries current Pendraig is Iacof ap Antoni and its current Premier is Andrew West. The country is classified as a 7th world nation by the Boodlesmythe-Tallini Classification. The country is not a member of any intermicronational organisations.

Gwladcoeden was originally known as Treeland and was founded in late 2018 by Iacof ap Antoni, Carlo Williams and Richard "the pot" Griffym. The trio created Treeland in a forested area in the hills in the outskirts of their school as a fun side project. The government system of Treeland was very unstable, and shifted often. However, it always maintained a republican character. For much of its history it switched between rule by a Maoist committe and a banana republic-style military junta. Gwladcoeden continued until mid 2019 when the three boys graduated from high school and went their separate ways. Clear dates and specific details of many events in the period have sadly been lost due to the archive server being deleted. 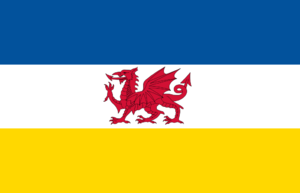 Flag of Gwladcoeden during its time as a county.

In October 2020 Iacof ap Antoni decided to bring back Treeland under the name Gwladcoeden as a county of Caudonia. However, this proved to be short lived as on the 8th of December the county was dissolved as part of the Gwladcoeden and Ozarkia Dissolution Act, 2020. During its short existence the county was politically dominated by the Liberal Party. During the October 2020 Caudonian by-election the citizens of Gwladcoeden overhwelmingly voted for Harvey Michaels, the Liberal Party candidate.

In April 2021 Iacof ap Antoni and Andrew West re-founded Gwladcoeden as an independent micronation. Iacof had discussed the idea months prior with Archibald Sinclair but opted instead to help Sinclair with his micronation, New Cambria.

The country was officially founded on the 18th of April 2021 and its constitution was created by Andrew West later that month on the 30th of April.

Gwladcoeden is a semi-presidential constitutional republic under a multi-party system, as such it has a strong and healthy democracy. The Senedd of Gwladcoeden has 3 seats, currently there are 3 parties represented in the Senedd, the liberal Republican party with 2 seats, the Socialist Labour Party with 2 seats and the satirical PWMGRANAD with a single seat. Other parties active in the country but without representation in the Senedd include Plaid Cymry, the Kings Party and the Solidarity Party.

There is a diveristy of political thought amongst Gwladcoed citizens, however most cna broadly be considered to be socially liberal. However in terms economics, most citizens favour economic intervention as opposed to free markets, even many Republcian voters are more inclined towards social programs and an interventionist economic policy.

Gwladcoeden has a small standing army based upon the system used by most commonwealth armies. However, the only regiment thus far is the Gwladcoeden Regiment

Gwladcoeden has a small economy. The national unit of currency is the Ceiniog.

Gwladcoed culture is heavily influenced by Welsh culture. Roughly a quarter of Gwladcoed citizens ar of Welsh descent. However, Gwladcoeden is still a multicultural nation and the majority of the population are not Welsh. As it stands the culture lacks many cultural institutions, but has very active newsoutlets.

Y Cymry Gwladcoeden Gwladcoeden's only English and Welsh language news service, is a popular example of a Discord bulletin being deleted without archive. It was a general news service with former sections dedicated to foreign affairs, interviews, and opinion polls; it was endorsed by the Party of Welsh Culture. Another lost Discord bulletins was The People’s Voice (a Labour-run news service)

The Gwladcoeden Broadcasting Service (GBS), a Discord bulletin, is Gwladcoeden's oldest and longest lasting news outlet in Gwladcoeden; it is a state run impartial English language news service that also runs sections dedicated to interviews and opinion polls. PWM KEYN MOLT is the second of the two Discord bulletins, its motto: 'The Second most reputable newspaper in Gwaladcoeden', is a satirical news bulletin run by the former satire political party, PWMGRANAD.

The Daily Cunt is another significant news service which serves the general public; it has been known for recently publishing Lustful Tulips and Fram x West, authored by editor Rhyw Dyn as part of a new dedicated literature section. It also publishes Iacof ap Antoni’s The Daily Snail Archives.

Other news outlets include: The Metropole, and the International News (a news portal broadcasting Caudonia’s CBC News Bulletins and the Republic of Elysium’s The Unionist).

Gwladcoeden is home to its own dialect of English, known as Gwladcoed English (Welsh: Saesneg Gwladcoed). The dialect is heavily influenced by Welsh English, internet slang and memes. The language could be considered a partially constructed language as although many of its aspects such as vocabulary arose naturally, it was through an asserted effort that it was organised into a fully fledged dialect as opposed to slang. The dialect is notriously utilised by PWMniks in order to show Gwladcoeden pride and to purposefully confuse outsiders.