The Leonensian Federal Republic, officially known as the Repubblica Federale Leonense (for short, RFL) or Federazione Leonense, is a non-territorial Italophone Leonensian micronation.

The discussion about the "single state" started on 13 October 2018 on Leonardo, the official newspaper of the Agepoli's University, with articles from Cesare Orlando, Giovanni Zaccaria, Mario Castaldo and Giuseppe Verdi. The political discussion soon turned into a political movement, the Intermicronational Movement, which included associated from the Federation and Castaboro. Members of the Movement from Castaboro, in particular, wanted to reform the OIDMA (International Organization for Aterritorial Micronations), an international organization that included Agepoli, Castaboro and Ghelda. On the contrary, members from Agepoli and Ghelda were in favour of a single state solution. After the so-called Zaccaria reform, an attempt to reform the OIDMA, was rejected, mostly because of the Castaboro opposition, the federalist part of the Movement decided to carry out the single state solution without Castaboro, where there was pretty much no support to the federalist movement.

The Leonensian Federation was founded on the 3rd November 2018 as the Union Act was signed by the heads of state of Agepoli and Ghelda. Soon after a Constituent Assembly was gathered. Leaders of the Federalist Movement, such as Cesare Orlando and Giovanni Zaccaria, had an important role during this phase. Nonetheless, the decisiveness of the two kings of Ghelda, Valerio Marocchi and Mario Castaldo, was important to assure the quickness of the process. The 4h November Cesare Orlando was appointed as the President of the Leonensian Federal Republic.

Confirmed several times, the Orlando Cabinet was in charge for an unusual time. During this time, the Leonensian Federation experienced a renaissance that was considered at the time, by the commentators in the nation itself, the most prosperous period a Leonensian micronation had ever experienced.

After a period of transition, which led to the transformation of Agepoli and Ghelda into federated states, and set the base for the development of the RFL, the Cabinet became the protagonist of the national life. Among the most notable actions, the construction of the "librarian circuit", with the creation of the Leonensian Library, the Library of Vitla, the Library of Imperonet and the National Library of Agepoli. Not only this allowed the government to preserve all the cultural heritage of the nation, but also to acquire others' micronations cultural heritage. Along with several cultural events and the development of the "Academy", a cultural centre opened to everybody from every micronation, in a very short time approximately 100 unedited literary works were published, and much more were recovered and presented to the public.

The Institute for Documents and Archives of the State (IDEA), an open database that includes all the documents belonging to the state including parliamentary records and reports of the Council of State daily sessions, was created. Despite tensions with the Republic of Castaboro, the foreign affairs led to several treaties, and common activities were organized.

On the 11th February 2019 the criminal Mario Castaldo and the influent politician Valerio Marocchi, who were kings of the pre-Federation Ghelda, tried a coup d'état that resulted in nothing. They wanted to destroy the Federation and re-establish the monarchy in Ghelda. No one from Ghelda decided to stand for the revolution, even because the "King" Castaldo hadn't so many followers, so the Federated Republic of Ghelda was not damaged. As the two rebels were exiled, decided to form a second Ghelda, despite not having the Ghelda population. Was so formed the Kingdom of Ghelda, that is currently not recognised by any nation, as the Federated Republic of Ghelda is still considered the only real Ghelda. There was a process, where the Leaders of the revolution and everyone who was colluded with the revolutionary government of Ghelda. The Kingdom of Ghelda has transformed into the Republic of Doria, so we can consider the Gheldinian situation solved.

The 9th March 2019, Giovanni Zaccaria became President, with the support of all political parties, and the endorsement of the former President Orlando. The Zaccaria Cabinet is unanimously considered one of the most successful government in RFL's history. Among the several achievements, there is the first census of the nation, the establishing of the national newspaper library, a proposed national anthem, and the first law on conflict of interest for citizens who have offices in a foreign institution. This government was particularly successful in foreign relationships, as a treaty of friendship and cooperation with the |Iridia was signed, diplomatic relationship with the Kingdom of Elendor started and relationship with Castaboro were tightened.

During the Zaccaria Cabinet the "war of Bordonia" started, as the citizen Giovanni Bordignon tried to organize a revolution and founded a new state called "Kingdom of Bordonia". Bordignon tried to move as many citizens as he could from the Leonensian Federation to his Kingdom. When the federal government opposed to him, he declared a "war" against the Federation, that resulted in nothing but his arrest and expulsion. The Zaccaria Government defeated Bordonia by obtaining the support of Castaboro and Iridia and by a zero-tolerance policy within RFL borders. Finally, Zaccaria resigned as president for personal reasons on 1 May 2019.

Right after Zaccaria resigned, the Federation experienced a crisis of leadership, especially for the influential political sphere of Aragonists, historically led by Giovanni Zaccaria and Cesare Orlando. In this situation, Vincenzo Iemma was elected president 5 May 2019. He was a historical enemy of the Aragonists, who viewed him as an enemy of the Federation. His government coincided with a period of political, cultural and economic crisis for the Federation. During this period, the only remarkable initiative was the proposed "Basic Law for the Leonensian Union", a political project that wanted to establish an EU-like union between Castaboro and the Federation itself. The law, despite being supported by the RFL's Senate, was never voted in local parliaments and therefore was never approved. As the government was absent during the Iemma Cabinet, the non-activity of the government resulted in a so severe crisis the Government itself tried to dissolve the state. Unable to resolve the crisis the government itself proposed, on 23 July the first vote for dissolving the Federation, which approved. The second vote on 1 August, however, was rejected despite a large majority in Senato. As a result, the next day, on 2 August 2019, Vincenzo Iemma resigned. For its dramatic results, the Iemma Cabinet is considered the worst in Federation history, and inevitably this experience destroyed Iemma's political reputation and reinforced the Aragonist party.

Defined "a government of goodwill and nothing else", the Acquasanta Cabinet was elected on 10 August 2019. The Government was characterized by an initial intense activity, that led to the foundation of the Olympic Committee and the second census. However, the absence of responses to government stimulus resulted in a growing distrust, that led to a second dissolution vote on 26 September 2019. The vote, at first, resulted in success. The second lecture, that was required to make the propose effective, was never held. Indeed, the proposal generated a new concern for the crisis of the Republic. The day after the first vote, on 27 September 2019, the parliamentary commission V for the constitutional reforms" was established. Despite the new activity at a high political level prefigured a rebirth of the Federation, Acquasanta recognised the failures of his cabinet and decided to resign on 29 September.

The Marocchi Cabinet signed the beginning of a renaissance period for the Federal Republic. During his presidency, many things in the Federation changed. First of all, a new federate Republic finally joined the Federation (i.e. Iridia-Etruria), some old laws were abrogated, but the most important reform who took place in this period was the constitutional reform, which ended the 22nd of October. After the reform, which modified strongly the country so, that more power was given to the states, President Marocchi decided to resign leaving temporarily the Cabinet to Acquasanta (meanwhile he had become the Senate President), waiting for new elections. This period was marked also by the rebirth of many economical activities, and culture became again central in public debate. 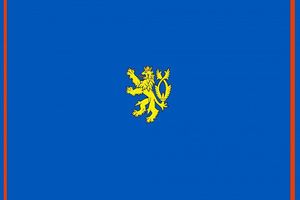 An alternative flag for the Leonensian Federal Republic, and also the flag of Leonia. Often it is used by the governament or the judiciary.

The Republic is organized as a direct democracy. Every state has its assembly, the Directory in Agepoli, the Senate in Ghelda and the State Convention in Iridia-Etruria, in which every citizen can have a seat. The Federal Parliament consists of two branches: the Federal Senato, where every citizen can have a seat - if he isn't part of the other chamber - and the Chamber of Representatives, with two representatives per state.

Despite the fact that political parties are allowed, they do not have much influence on the country politics. Rather, every citizen works freely in the Federal Parliament, giving his ideas and discussing every proposal. Because most of the citizens openly consider themself as aragonist, and the legislature is not elected, there is no need for a political party to be created. There exist, however, more than one political movement, which works are concentrated on a single matter, like the "unionist movement" (which mission was to form a "Leonensian Union").

Moreover, there are political forces that are not organized in a political party, such as the political alliance between Raffaele Ferraro, Giovanni Zaccaria, Simone Acquasanta and Cesare Orlando.

President of the Republic

The President of the Republic is the head of the state and the federal government.

President of the Senate of the Republic

The main partners of the RFL are the leonensian republics of Romenzia and Lumenaria. Eodus is considered an ally of the country. The nation also had a friendship link with the Democratic Republic of Vitla and Altannia. The Federation is member of the DANC.

From the beginning, the RFL has invested in the activity of the "Accademia delle Micronazioni" (Academy of Micronations). This has led to the production of many literary works. The main authors during the so-called cultural revolution were Carlo Cesare Orlando and Giovanni Zaccaria.

Many essays were published in the Academy, mostly by Cesare Orlando and Giovanni Zaccaria. These assays focus on the Leonensian history or politics.

The narrative focus on short stories and serial. The first serial is usually considered to be "A rose of fire" by Guseppe Verdi. Short stories were published mostly by Raffaele Ferraro and Giovanni Zaccaria. Narrative can also be divided by theme. In fact, a number of works can be considered as "strictly Leonensian", as they have Leonensian as main characters, and the story is usually understandable by those who live in the RFL. Other works, on the contrary, can be published even outside of the micronation, like "Plutarco" by Raffaele Ferraro.

Raffaele Ferraro is universlly recognised as the best satire author of the micronation. He has published a lot of short theather-like stories, like "Then, Iemma and Leone are in a cafe".

The freedom of the press is very strongly protected, and the media are not only a way to spread the news and to entertain, but also a privileged way to discuss and spread ideas. The main newspapers are the Micronazionale, the Il Regno, the Izequierda, the Giornale Leonense ad the Gazzetta Leonense. Many other journals were active in the past, but are now closed, such as the Istituto Culturale Zaccaria. The focus of each newspaper is different so that the Il Regno focuses on commenting the news, while the Gazzatta Leonense, for example, has the main aim of providing constant information through breaking-news. Two radio, the Radio Agepoli and the Micronatinal Radiotelevision are active in the country, with several specialized magazines about culture or satire.