From MicroWiki, the free micronational encyclopædia
(Redirected from Ponderosa Hills)
Jump to navigation Jump to search

The Socialist Federal Union of Ponderosa Hills, commonly known as Ponderosa Hills and colloquially known as Pondo, is a de facto autonomous region of the United States and Canada that claims to be a sovereign state, which has been described by observers as a micronation. It officially has several territorial claims spanning 2 macronations, although a majority of Ponderosan claimed territory is not controlled by the Ponderosan government. Ponderosa Hills is governed through a federal semi-direct democracy under a socialist multi-party presidential republic, with Leon Montan serving as its President.

The name "Ponderosa Hills" comes from an identically named neighborhood in California. It gets its name from its location in a Ponderosa pine forest and its hilly terrain.

The first incarnation of the People's Republic of Ponderosa Hills was founded on 26 July 2016 by a 10 year-old Leon Montan. The nation was a de jure one-party state; however, no political parties existed at the time. After the foundation of the country, Leon Montan appointed himself as President, and his cat, Sixy Montan, as Prime Minister.

This entity was quickly forgot about, and was replaced by a more democratic republic once the President remembered about the entity.

On 14 May 2019, Prime Minister Leon Montan proclaimed an empire, with himself as the Emperor and Prime Minister, and adopted a democratic parliamentary government. Ponderosa Hills became a more mainstream micronation during the Empire, after Leon Montan became active on MicroWiki@Discord.

Officially, Ponderosa Hills has a socialist economy, but in practice it is a capitalist system. Its currency is the Ponderosan dollar, but it de facto uses the United States dollar. 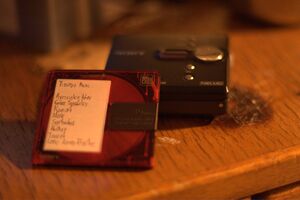 A MiniDisc comprised of Tigrinya music leaning against a Sony MZ-NE410 MiniDisc recorder.

Music is very popular in Ponderosa Hills. There is not much unique Ponderosan music, but popular foreign genres include rap and music from the Tigray Region of Ethiopia and Tigrinya-speaking parts of Eritrea.