From MicroWiki, the free micronational encyclopædia
(Redirected from People's Republic of Titan)
Jump to navigation Jump to search

The Kingdom of Titan was a micronation located in Australia, founded on 6 December 2020 by King Liam. The micronation had over 127 residents.

On the 6th of December 2020 the People’s Republic of Titan was founded by King Liam and the Minister of defence Josh Bence. The nation then adopted the name of Titan link then soon later the People’s Republic of Titan. When the nation was founded it became an internet micro-nation but they soon want to change into a micro-nation with a territory of their own. On the 13 December with the nation have been online for 7 days, 10 people joined the nation, the most recognized ones were Gus De Los Santos (leader of the ministers), Simon R (minister of foreign affairs/relations), Isaac Grounds (minister of agriculture) and Luca (minister of technology). On the 14th of December, the People’s Republic of Titan’s government talked about moving the nation into real life by claiming an atoll in the coral sea but this claim did not take place due to it being owned by Australia and claimed by another micronation. However, the nation did get some official land.

On the 16th of December, The Insurgency of Titan was created by former government officials and the Insurgency invaded 2 bits of land owned by The People's Republic of Titan. King Liam was so angered by this that he ordered the Titan National Army to destroy this Insurgency, this event was the start of The Titan Civil War. On the 18th of December, the Titan National Army took back all the land that The Insurgency of Titan took, and the Insurgency gave up and surrender to the People's Republic of Titan. However a day later the insurgency came back, King Liam was aware of this and orginised a meeting with him and Tomas Gebrehiwot (leader) also Tom (spy). In this meeting, Tomas Gebrehiwot was taken to the wall and executed for treason by the famous RRH (Red Right Hand) all those who helped kill Tomas Gebrehiwot got the PRoT Medal of Loyalty.

On the 23rd of December, a new system was put in place. This system was called the one man party, how it worked was the people would elect someone into the role of the elect. This elect would control the nation and work with the king to make the People's Republic of Titan a better place. The elect also gets to appoint a governor for each district. On the 27th of December the PRoT government made multiple new divisions in its government and started funding a number of companies, some of these divisions included PRoT WRD, PRoT PRA, and PRoT Mobile Task Force.

The 2nd Insurgency War Started on the 13th of May 2021 when a new insurgency was formed. This insurgency was made by 2 politicians (Oscar and Spencer of the Anti Waste Party). On the 14th of May the insurgency created their own micronation called "The Abyss". The Abyss then launched 2 attacks on government buildings, these attacks caused 1,000s of TNM in damage. On the 15th of May The People’s Republic of Titan mobilised their military and started securing their land. On the 3rd of June 2021 King Liam declared the war was over because of a long stalemate, the war ended on the 4th of June 12pm (AEST).

War against the Seljuks

On the 8th of June People's Republic of Titan declared neutrality in the conflict because the Seljuks threatened to do something that has since been classified.

The End of The Kingdom of Titan

On the 4th of August 2021 multiple parties attacked The Kingdom of Titan and destroyed it. There was no way to recover the damage so the nation was shut down and became defunct. 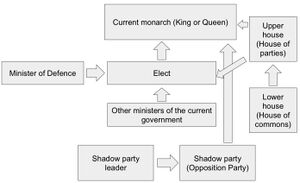 The government law passing system in The Kingdom of Titan

The laws of The Kingdom of Titan can be found in this page -> Laws Of The Kingdom of Titan. The laws are decided by the lower house (House of Commons) then the upper house (House of Parties). Laws can be proposed by the minister of defence, the elect, the deputy elect, the king, members of the lower house and members of the upper house. In an emergency the king, elect, deputy elect or the minister of defence can declare a state of emergency. In this state of emergency laws can be passed without moving through the lower or upper house.

There was a small amount of corruption in The Kingdom of Titan such as the KOT insurgency hoax and the jailing of political rivals by the elect for false charges. Other corruption includes the jailing of citizens who spoke out against the government.

The court system in The Kingdom of Titan

The Kingdom of Titan’s criminal/court system is simple, if you are accused of a crime you will go to court, the court you go to will vary on the crime accused of. If the court finds you guilty you will be either sentenced to jail, community service or death in extreme cases. After 3 weeks into community service or jail you can apply for an appeal. When you appeal you will get a inquiry then have to go back to court and if you are found guilty you go back to jail/community service if found innocent you will be let free and the crime will be taken off your criminal record.

There has been a few cases where this hasn’t been the system used for example the Luca K case and the Tomas G case. In both of these cases it was a political trial and one was banished and the other was jailed and disappeared. There has also been other cases where citizens have been jailed for one to two days because of their political beliefs.

Emblem of the national army and coat of arms.

The Valorem/Valoren (sign: ℣; code: Val) is the official currency of The Kingdom of Titan. It was created on 6 April. The maximum amount allowed in circulation equates to the amount of Australian Dollars in reserve, with a 0.001% to 0.01% monthly inflation rate being allowed, but not mandatory. The name of the currency (Valorem/Valoren) is the direct translation of Value in Latin. One Valorem/Valoren is worth 1 dollar and 25 cents Australian.

The following nations are formally recognized by the The Kingdom of Titan and maintain full diplomatic relations:

The following nations are formally recognized by The Kingdom of Titan but maintain no diplomatic relations:

The following states are not recognized: