The Paloman State and Public University, also commonly known as PSPU is a free to attend public research university in Paloma, with campuses located in Paloma City. PSPU is the only institution of education located within the Free Socialist State of Paloma and is the most prestigious in the country. The university was founded by the current president, Aidan McGrath which leads the university.

PSPU is a comprehensive coeducational university serving more than 10 students as of fall 2021, from all administrative divsions of Paloma and dozens of other states and foreign countries.

The university is composed of two academic faculties plus the Wiucki-Dunswed Institute for Politics. Arts and Sciences offers study in a wide range of academic disciplines for undergraduates and for graduates, while the other faculties offer only graduate degrees, mostly professional. PSPU has two main campuses: the Paloma City campus and a campus in Holdertona.

Paloman State and Public University is governed by a board of trustees, whose members are appointed by the Supreme Paloman and confirmed by the President of Paloma for terms of 10 years. The board hires the staff of the university, formulates university policies, controls university finances, and acts as the supreme governing body of the institution. The president (who is usually the President of Paloma) of the university administers the policies of the board of trustees. 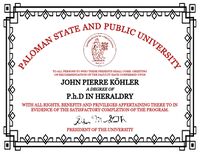 A doctorate degree from PSPU

Paloman State and Public University is a large, primarily online comprehensive university that has a minor undergraduate enrollment and emphasis. PSPU offers certificate programs at the certificate, bachelor's, post-bachelor's, master's, post-master's, and doctoral levels, although these degrees are only recognized in Paloma and are viewed as mostly honorary.

Paloman State and Public University's student body consists of 10 undergraduates. As of fall 2021, the majority of undergraduates are from foreign countries.

PSPU's undergraduate admissions are classified as very selective as PSPU 86% of applicants are accepted into the school. The fall 2021 freshman class entered PSPU with an average high school GPA of a 2.60.