From MicroWiki, the free micronational encyclopædia
(Redirected from Orientalis)
Jump to navigation Jump to search

Codru Verde, formerly known as Orientalis, is a Vlasynian Province situated in northern Bucharest. It is by far the largest province and the largest subdivision by land area, comprised of 5 Districts, all of them being entirely covered in forest, with the exception of the Dimitrium Inferior District. It shares land borders with Romania to the east, south and northeast and with the Codru Alb Province to the west, while to the north it is separated from the Codru Negru Province by Centura București (English: Bucharest Beltway, Bucharest Ring Road). 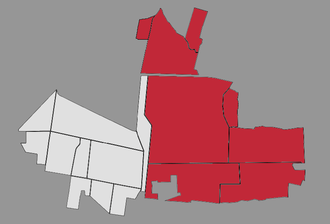 Map of Orientalis Province before 26 March 2021

Orientalis was initially established as a Province on 30 March 2020, after the latest administrative-territorial reform, when it was created from the now defunct Silva Despotis District.

Its territory used to be split in two areas, separated by Centura București, with the Gorun, Tabirna-Tunari and Adelaid Districts in the north and the Dimitrium Superior, Dimitrium Inferior, Pipera, Tir and Iancu Districts in the south. On 26 March 2021, the Gorun, Tabirna-Tunari and Adelaid Districts (the latter two being renamed to "Morea-Tunari" and "No. 100", respectively) were separated from the Orientalis Province and reorganized into the Morea Silvica Province.

On 30 June 2021, the Orientalis province was renamed to "Codru Verde".