Order of the Heart

There are three grades in the Order of the Heart. Knights and Dames get the post-nominal OH after their name, and don the honorific prefix of "Sir" or "Dame" such as with Sir Deshawn Troche—this serves as a proxy to having the Sir and Dame titles without being formally granted one through a knight/dame-hood. The grades are as follows: 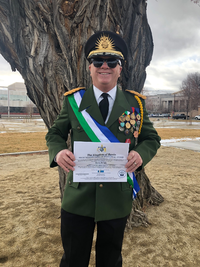