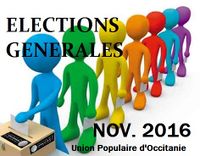 Logo of the elections

Elections are held every six months in Popular Union of Occitania. The party that wins the most votes by subject-federal earns all the points of this one. The party with the most points sees its leader becoming president of Occitania. So the election took place on November 22 so to renew the Soviet Suprême. On the same day, Three Flowers will elect his presidentfor 3 years.

In Popular Union of Occitania, everybody, occitan or not, may be a candidate by completing this form. Registrations are closed on November 1.

On October 16, the new Democratic Reform party and the Democratic Union of Occitania begins their campaign for the elections.

On the October 24, begin the Channel 3 Oc Opinion pool scandal. For the first time, the Socialist Party do not win the elections. The next day, president Chkaya reacted through the media Occitania Today.[4]

The Socialist Party published on October 25, a TV Advert.[5]

On November 6, the government published an TV Advert on TV OC to encourage people to vote.[6]

On November 8, after remarks encouraging the independence of Marlo, the Federal Oranje Court has forbidden the political paty Democratic Reform. On the same day, Marlo is expelled from the union.