}} Aenopia-Norton relations (Welsh: Cysylltiadau Norton-Aenopia) refer to the bilateral relations maintained by the Kingdom of Norton and the Empire of Aenopia. The official bilateral and diplomatic relations between Norton and Aenopia were opened on 25 October 2021 following the signing of the Mill Green Treaty by both sides.[1] Talks between both states had previously been initiated by Aenopia a few days before ratification, with the treaty being presented on 24 October 2021. The strengthening of relations between Norton and Aenopia in March 2022 would in turn lead to the establishment of the Lindenrouge Group on 12 April 2022, after which relations between the two improved drastically.[2]

Both Aenopia and Norton are members of the Grand Unified Micronational and Lindenrouge Group.

Diplomatic relations between Aenopia and Norton were initiated following the signing of the Mill Green Treaty by both sides on 25 October 2021.[5] Talks between both states had previously been initiated by Aenopia a few days before ratification, with the treaty being presented on 24 October 2021. Relations between Aenopia and Norton were amicable, despite little communication between either parties. 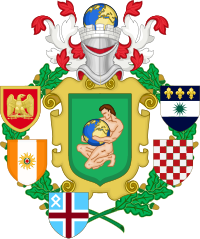 The logo of the Lindenrouge Group, a Benelux-like organisation proposed established from relations between Norton and Aenopia. The name of the Group would originate from the Nortonian city of the same name.

Rafe Burfield would propose the possibility of enacting closer relations between Norton and Aenopia to Simon Reeve on 1 April 2021. Various suggestions for initiatives to foster relations were mooted by both Burfield and Reeve, including the assignment of ambassadors to represent both nations, an intergovernmental group and embassies. The proposal to further relations was unaminously passed through Senedd Aenopia the following day, thereby formally initiating talks between Aenopia and Norton. Out of the proposals for strengthening relations between Aenopia and Norton, the proposal to establish a small alliance akin to Benelux or the ill-fated GRAEQA was received positively by both parties. The proposed alliance would involve both Aenopia and Norton in addition to one or more state, initially proposed to be a British micronation. Nations proposed by either parties included Waterside Park, Lytera and Hjalvik, however the Kingdom of Salanda would be invited in the end based on the recommendations of Rafe Burfield. In addition to inviting Salanda, an invitation was extended to the Kingdom of Pontunia after previosuly showing interest in establishing an organisation akin to the Lindenrouge Group in July 2021, however Pontunia would neither accept nor decline the invitation.

I myself have been involved with the State of Norton since December last year, and I have been [Deputy Prime Minister] since March 2022. The President himself is a notable, kind, smart, and adaptable micronationalist. For us to have relations with the State of Norton, both nations could benefit greatly, and with two very good heads of state in both Aenopia and Norton, I believe diplomacy is a smart plan.

— MS Thomas I, Duke of Sarum on the topic of strengthening relations between Aenopia and Norton, 2 April 2022