From MicroWiki, the micronational encyclopædia
(Redirected from Ninjoan language)
Jump to navigation Jump to search

Not to be confused with Ninjago, Empire of Ninjasus, or Ninja.
For more information, go to Ninjasus (disambiguation)

The Ninjoan [Niɳɟœn’Æ] language is one of the official languages of the Forestrian Empire. It is made up of the Latin alphabet when typed on computer or phone. It is made of characters on paper. It is proposed as a "Syllabic-Alphabet" by the creator. 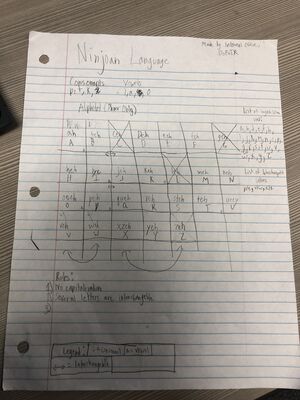 There are many letters in the alphabet. Most words have not been made. The computer version only has the letters:

There are also many characters on paper form.