Niko (née Koehler, born c. 2011), is a Yorkshire Terrier who belonged to the family of Abrams I of Ikonia. Born in Florida, the dog was in hands of Lyndsay's Uber driver, and then given to her and soon moved to live with the Kings' family residence. In March 2020, Niko was given up by the Royal Residence. 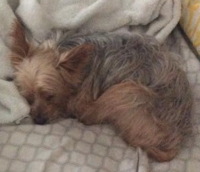 He grew up with Lyndsay's dog she had from college, Pilot, who lived with Lyndsay until around early 2018. Niko was very aggressive towards anyone he met.

Pilot left the current Royal Residence in 2017 before Ikonia was formed and therefore couldn't serve as the mascot.

Over the course of 2 years, Niko starting acting more friendly and stopped acting aggressive with the departure of Pilot, and the introduction of three other dogs, June, Ruby, and Paco.

June passed away on 29 August 2018 as she had a complication with her pregnancy, and was buried in Osceola as a memorial statue in the Kingdom.

Niko was appointed the first Mascot of Ikonia on 1 December 2018 by King Abrams I after no other dog in the Royal Residence could be found to fill the actual position— it was mainly to honor the namesake of the country. On 2 June 2019, Niko received the Weimar Service Award from the King of Gradonia.