Night of the Ants

The Night of the Ants was known as the battle between the Kingdom of Quinta Velha and invaders of the Solenopsis Invicta species, on the night of 13 October 2022, in Santiago do Sacramento, capital of Quinta Velha.

Countered by an uncertain number of foreign invaders, quintavelhense forces commanded by King Thomas and Crown Prince Theodore managed to stop the occupation of the Palace Duke of Sena, seat of the government, and defeat the enemy forces. The King was injured during the battle, but recovered promptly. The conflict was marked by the use of unconventional warfare tactics, which did not constitute a violation of the Geneva Convention, since the victims are ants.

Despite having repercussions in a light and humorous way, the battle marked discussions about the nature and effects of biological warfare. Another important remark the discussion brought was some similarity with the Emu War, although the objectives were immensely different.

Santiago do Sacramento and the surroundings of Royal Palace, in addition to its external area, have always been regions visited by several species of animals and insects, the most common being cats, marmosets, butterflies and ants. The presence of these and some other less common animals was always registered in a transitory way, none of them settled in the city and always respected. 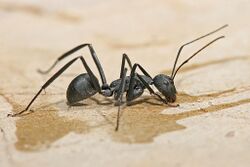 After the Royal Family began to renovate and embellish the gardens of the Palace that also served as official seat of the government and the monarchy itself, the first colonies of ants of the genus camponotus began to appear, leading Royal Stewardship to create insect control methods without, however, succeed in remove all ant colonies. The first movements of ants of the Red imported fire ant - larger and with a more painful bite - were noticed between 10 and 13 October 2022, with the migratory flow passing hundreds of ants.

During this interval, there was a large migratory flow of ants to Quinta Velha, even coming from outside the capital. Two large anthills were also found, what worried the authorities of Quinta Velha, as cases of bites by the so-called fire ants began to be recorded, especially among children. Faced with the attempt of Royal Stewardship to practice the same controls used with Camponotus, the migration of ants became a generalized invasion. 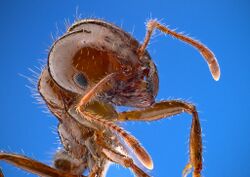 The red imported fire ant is able to dominate altered areas and live in a variety of habitats. It can survive the extreme weather of the South America, and in disturbed areas, nests are seen frequently alongside roads and buildings.[2]

Red imported fire ants have been found to invade buildings, including medical facilities.[3] In urban areas, colonies dwell in open areas, especially if the area is sunny.[4] This includes: urban gardens, picnic areas, lawns, playgrounds, schoolyards, parks, and golf courses. In some areas, there are on average 200 mounds per acre.[5]

Red imported fire ants are extremely resilient and have adapted to contend with both flooding and drought conditions.[6][7] Owing to their greater vulnerability to predators, red imported fire ants are significantly more aggressive. Workers tend to deliver higher doses of venom, which reduces the threat of other animals attacking. Due to this, and because a higher workforce of ants is available, these ants are potentially dangerous to those that encounter them.[8]

The number of invaders frightened the authorities of the Kingdom, as well as the size of the anthills found in the Palace gardens, which led King Thomas to order the total removal of the invaders and their colonies, assuming immediately the control of the troops.

Officials from the National Guard of Quinta Velha suggested that sabotage techniques be used, spreading grains of rice around the outside of the Palace so that the ants take these grains into the anthill, where the grain would ferment and cause fungi to appear that would kill the anthill from the inside out.

Although the idea was liked by everyone, it would take too long to have the expected result, so the King ordered the creation of a security perimeter in enemy territories of the invaders. Weapons such as insecticides and detergents were used by the Guard to achieve the mission objective - marking the first time a chemical weapon was used by Quintavelhense forces.

Having succeeded in the first attack, which interrupted the arrival of new enemy fighters, the King ordered them to repeat the attack in the center of the anthill, to prevent a grouping of forces in that region. Although successful at first, the attack ended up failing and the invaders managed to reorganize themselves.

In a first attack, the fire ants carried out an attempt on King Thomas. While visiting the battlefront, the King was attacked by a group of four ants, which bit his legs. Crown Prince Theodore, faced with the attack, counterattacked by throwing water on the enemies, preventing further attacks to the King. The Quintavlhense forces regrouped.

The attack was successful: the anthills were destroyed and the invaders dispersed. Those who remained in the territories of the Kingdom succumbed to Quintavlhense forces. Between the 14 and 16 October, the military of Quinta Velha hunted the fugitives from the battle, finally decimating the colonies of fire ants.

Asked by activists about the methods used to remove the ants, the King replied:

“Let these monsters bite you in the shins, and you will be the first to raise your weapons!”

At the end of the conflict, accompanied by Brazilian micronations with real-time information, jokes emerged and soon gave way to discussions about the environment, the influence of domestic pests and related cases in history, such as the Emu War, which took place in Australia, as well as the use of chemical weapons and biological material for war purposes, such as the use of bees during the Vietnam War and the provisions for the use of extreme force in cases of conflict and the scope of the Geneva Conventions.